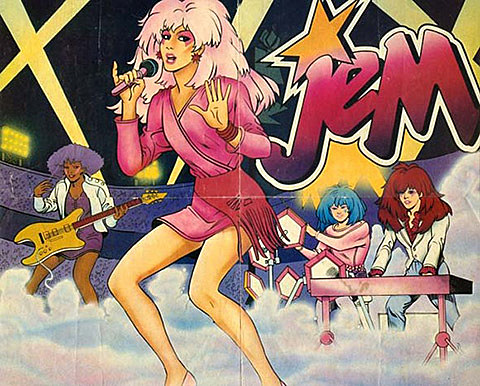 With everything getting recycled, it was bound to happen: we're getting a live-action Jem And The Holograms movie. For those who dont' remember, the animated series ran from 1985 - 87 and was about wealthy record label owner Jerrica Benton, who had a secret popstar alter-ego Jem, the leader of The Holograms. They got into "truly outrageous" adventures. While the speaking voice of Jem was played by Samantha Newark, her singing voice was done by Britta Philips of Dean & Britta (and Luna, and the Belltower before that). You can watch a video of Phillips talking about her Jem experience below.

While Jem And The Holograms could certainly be a fun idea for a movie -- Josie & the Pussycats was much better than anyone expected -- the people behind the Jem reboot don't give a whole lot of hope: Justin Beiber manager Scooter Braun, Paranormal Activity producer Jason Blum, and GI Joe: Retaliation director Jon M. Chu. The website has launched and Braun, Blum and Chu are looking for your help. Not financial, but creative. What kind of creative help? "Writing songs, to designing costumes, to writing the screenplay," says Chu in a short web video announcing the project where they invite fans to submit videos to the movie's Tumblr.

You can watch that video, plus some classic Jem clips, below...

"Jem and the Holograms" Theme

Jem and the Holograms - "Who Is He Kissing"

Jem and the Holograms - Showtime, Synergy