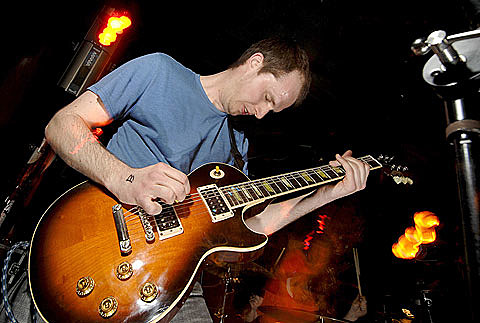 Mount Moriah / Horseback mastermind Jenks Miller stopped in BV's virtual HQ to offer his thoughts on 2012, dropping off a thoughtful piece on Scott Walker, Swans, Bobby Womack, metal and a few stops in between. Check out Miller's thoughts on 2012 below.

Though Horseback currently has no plans for the road, Mount Moriah does, part of a tour in celebration of their new album for Merge. Look for the band to hit Mercury Lounge on March 25 (tickets).

Jenks Miller's thoughts on 2012, as well as some streaming audio and video, below...

Horseback - The Invisible Mountain from (((unartig))) on Vimeo.

My year in music was dominated by the return of the avant garde's old guard. Swans' The Seer and Scott Walker's Bish Bosch were the two most essential records of the year as far as I'm concerned. By turns creepy, confrontational, dark and redemptive, these two records stood tall over a landscape dotted with many strong releases. The Seer in particular is a high-water mark for music in the aughts, proof of what's possible if genre conventions are ignored in favor of a singular creative vision.

Aleph, Terry Riley's first record of pure organ/synth improvisation in years, found another legendary experimental artist in top form -- or at least in my favorite of his many creative modes. Revisiting his just-intonated keyboard studies, Riley opted for a thin, processed synth-sax sound this time around, which ostensible handicap ultimately served to underscore the transcendent qualities of the music itself. Even if its sheer length makes it difficult to digest in one sitting, Aleph is my favorite Terry Riley release since 1971's Persian Surgery Dervishes.

Altogether more sinister than anything in Riley's universe, Boyd Rice's NON turned in a heavy slab of new noise, marking a return to the confrontational sounds of his early work. I loved 2002's slow-burning and ritualistic Children of the Black Sun, but Back to Mono is more indicative of the approach that made NON an essential early noise project in the same league as Whitehouse, Ramleh, or Skullflower (in fact, the new LP's lead track "Turn Me on Dead Man" could be a Skullflower jam from Form Destroyer or Last Shot at Heaven. In my book, this is a very, very good thing). Boyd Rice's typically self-aggrandizing lecture about the noise genre on the LP sleeve is just icing on the cake.

Though not really avant garde, R&B veteran Bobby Womack's The Bravest Man in the Universe did challenge genre conventions and was unfortunately dismissed as a result. I thought its sparse electronic production served as an excellent foil for Womack's perfectly human vocal style, but many critics didn't see it that way. (Oh well; it's their loss!) Bravest Man and Sinead O'Connor's How About I Be Me (And You Be You)? were my favorite mainstream pop records of the year. O'Connor has long been one of my favorite iconoclasts. The fact that her iconoclasm takes place in the unflattering light of day has made her as important a figure to me as the most obscure and shadowy black metal artist. It was inspiring to see her infamous public critique of the Catholic church vindicated over the last few years, and even more inspiring to see her emerge from a reclusive lifestyle with a record as strong as this one.

My friends and collaborators James Plotkin and Aaron Turner had a fantastic year. Jodis' Black Curtain fulfilled the promise of their super group's previous record, serving as a billowy counterweight to the most hopeless moments of Plotkin's previous band, Khanate. The album's monolithic centerpiece, "Red Bow", is one of my favorite tracks of 2012. If Hydra Head is indeed bowing out of the music business, they're doing it in style.

Plotkin also made a fantastic record with percussionist Jon Mueller. Terminal Velocity's limited vinyl run was well-executed, but this record deserves a much wider release. Karlynn Holland's cover artwork depicting a human figure plummeting through reams of paper streamers hints at what's going on here: a free-fall through highly-detailed electro-acoustic architecture. Similarly limited and hard to find, Gate's Damned Revolutions presented two sides of blissfully-awry, processed guitar smears that rival anything on Gate's 1994 masterpiece The Dew Line. Andy Stott's Luxury Problems was much more prominent in the press, and while I didn't find its trip-hop influenced sounds to be quite as profound in the ever-expanding world of electronic music as Terminal Velocity or Damned Revolutions are, Luxury Problems is another winner from the vanguard Modern Love label.

As far as metal is concerned, I really have to hand it to the folks at Relapse for what may be their best single year of releases since the mid-90's. It feels kind of awkward for me to give props to Horseback's own label, but Relapse really went the extra mile this year. Incredibly solid and heavy as fuck releases from Hooded Menace, Pig Destroyer, Weapon, and Serpentine Path merged with the latest exhaustive installments of the Death reissue campaign and a newfound level of recognition for Baroness to make 2012 a banner year for Relapse. Kudos, guys.

Other 2012 metal releases I enjoyed include Rahu's The Quest for the Vajira of Shadows, Wodensthrone's Curse, Cannibal Corpse's Torture (CC's best record drops in 2012? Who would have thought?), Deiphago's Satan Alpha Omega, Deathspell Omega's Drought, and Rhinocervus' RH-11. I haven't heard the new Incantation or Krallice records but those are probably great too.