photo: Jenny Hval in Chicago in 2014 (more by Zach Pollack) 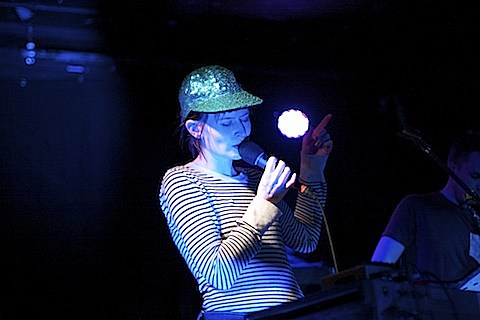 Jenny Hval's new album, Apocalypse, girl, comes out June 9 via Sacred Bones, and today she's released a video for its single "That Battle Is Over." Director Zia Anger worked with an entirely female cast for the video, including Hole/Smashing Pumpkins' Melissa Auf der Maur, and said:

I guess it goes back to '96 for me, and the 'girl power' mantra I've been repeating since I learned it from the Spice Girls. The female experience is far from singular (and even further from this white, suburban, American-retro dream), yet around every corner there is a common pain, a wisdom of ecstasy, and an obsession with the uncanny that we all share. Collaborating with an entirely female creative team (with the support of a few great gentlemen) gave birth to an exploration of Jenny's song and an inquiry into the sarcasm that pulses through it.

Watch below, via Pitchfork.

Jenny also announced several more tour dates since we last spoke, including a return to NYC on September 6 at Rough Trade. Tickets for that show go on sale Friday (5/8) at noon with an AmEx presale starting Wednesday (5/6) at noon.