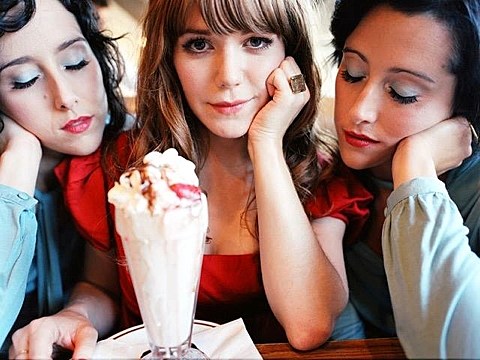 Jenny Lewis & the Watson Twins recently announced that they're celebrating the 10th anniversary of Rabbit Fur Coat on a short 2016 tour with M. Ward. The tour already included a NYC show on February 3 at Beacon Theatre, which is still on sale, but it now also includes a second show the day later (2/4) at the same venue. Tickets for night 2 go on sale Friday (10/2) at 11 AM with AmEx/Chase/fan/Bowery/local presales starting Wednesday (9/30) at 11 AM.

Rabbit Fur Coat also gets a reissue on January 29 (pre-order). Updated dates below.

Over the weekend, Jenny played the Trans-Pecos Music Festival in Marfa, TX, and she was joined by special guest Annie Clark aka St. Vincent during her set. Together they played Jenny's "Girl on Girl" and "Just One of the Guys," St. Vincent's "Cheerleader," and covered Deee-Lite's "Groove is in the Heart." Watch below.

tonight has been so stupidly amazing. It's only night one out here at #transpecos #transpecos2015 #elcosmico #marfa so I can only imagine what tomorrow has to offer. Sleep well, loved ones.