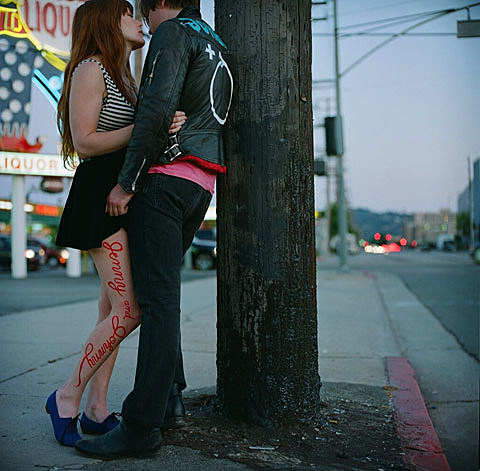 Jenny and Johnny (Jenny Lewis and Johnny Rice) will be releasing their debut LP, We're Having Fun Now, sometime this fall. The song "Scissor Runner" from it is is available online as a free download.

The pair will hit the road this September for shows across the US. On September 19th, as previously mentioned, they'll be opening for Pavement at the Williamsburg Waterfront. They have since also added their own show at Maxwell's on September 21st. Tickets are on sale.

One place they won't be playing is Arizona, which they'll be avoiding becuase of the new immigration law. There's a growing list of artists (which Jenny and Johnny aren't on) who are boycotting the state as part of The Sound Strike, a campaign headed by Rage Against the Machine's Zack de la Rocha. Jenny and Johnny's note about that, and all their tour dates are below...

we are so stoked to announce the first ever jenny and johnny tour. we are looking forward to seeing you all, whoever you are, all over the place. some of you may have noticed that although we are traveling the US extensively, we are not playing any shows in arizona. the arizona state legislature recently passed a bill, "SB 1070?, as part of their new immigration policy. this bill legalizes and sanctions racial profiling. they can stop you in the street, arrest and even deport you based on what you look like. we say: fuck that. so many of our friends and fans are of latino/chicano/hispanic origin, and we wanna show our love and respect for them by boycotting the state of arizona until they come to their senses. to all our rad southwestern peeps, we're sorry that the brutes are running the show and we hope they get voted out of office.