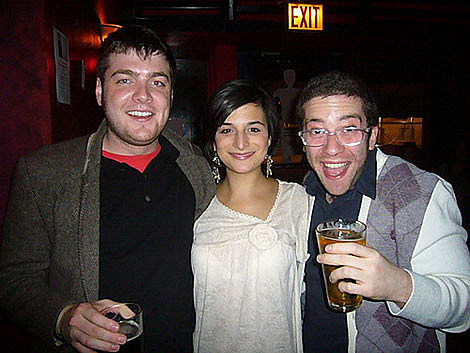 Woah, get ready. I have some huge news! As you know, one of my lovely Big Terrific co-hosts Jenny Slate has been absent as of late doing "showbiz" stuff, and a lot of you have been all "more like no-biz!!" Well first, stop saying that, and also, it's paid off! She is the newest cast member on Saturday Night Live, which is a long running television show that you have heard of. Won't that be amazing? She is going to be their go-to person for Gloria Estefan impressions. Also, she is going to be their go-to person for everything because she is the best, we love her so much, are so very proud, and cannot think of anyone who would be better on that show. It's really just perfect. Like, we were all surprised to get the news but also we totally weren't, you know? That's how great she'll be.

Jenny will be back at Big T soon to tell lots of showbiz stories about what Megan Fox smells like and how Ted Danson always has mints handy or whatever. Come this Wednesday and celebrate with Gabe and me, before all of us are too famous.

Thanks guys. You guys make Big Terrific the most fun. (Also us, but definitely you a bit too.)

Klaus also tells me that comedian Hannibal Burress has been hired by SNL as a staff writer... which is confirmed by the Apiary that also says UCB performer Christine Nangle will also be writing for the show. Congrats to everyone! Some Jenny videos below...