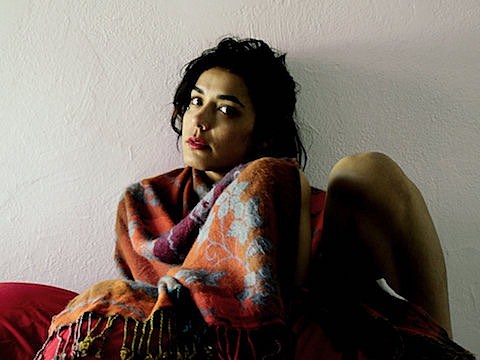 Warpaint's Jenny Lee Lindberg announced last month that she's releasing her solo album, right on! as jennylee, which is coming out on December 11 via Rough Trade. She accompanied the announcement with a trailer featuring three clips of the videos from her album's tracks, "never," "boom boom," and "he fresh." The video for single "never"  is available to watch now. Lindberg co-directed it with Mia Kirby and features some in-studio live performance footage as well as her dancing around at home. The track itself is reminiscent of English '80s new wave, and a bit heavier than Warpaint's sound yet should still appeal to fans.

Jenny Lee is currently on tour and will be stopping by NY's Baby's All Right on November 11 with Young Magic. Tickets for that show are still available but if you'd like to go for free, we're giving a pair away. To enter to win, below.

In other Warpaint news, Theresa Wayman is working on a new solo album that will be produced by Dan Carey, who previously produced albums for Bat for Lashes, Hot Chip, Kate Tempest, and more. Wayman is also releasing a 7" with BOSS, her new band comprised of Guro Gikling of All We Are and Sarah Jones of Hot Chip/NZCA Lines , featuring tracks "I'm Down With That" and "Mr. Dan's I'm Dub With That." The single will be released on November 27 via Speedy Wunderground.

All jennylee tour dates are listed, along with the video for "never," BOSS streams and ticket contest form, below...