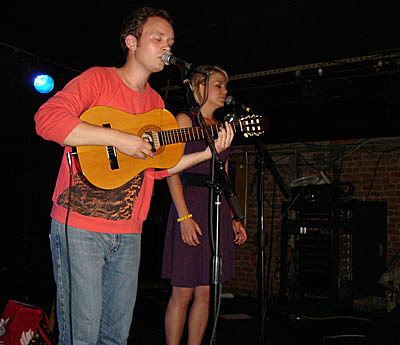 So when exactly did Frida Hyvonen get added to the Mercury Lounge bill last night? First I thought Jens went on at 10. Then I saw he wasn't going on until 11. Then I realized Frida was added as opener, but it was too late - I caught just her last song and what she did on stage with Jens. Oh well. Missing Frida's set aside, last night's show is now in stiff competition with Sunday's Amadou & Mariam show for 'favorite show of the year'. It's been a good few days. 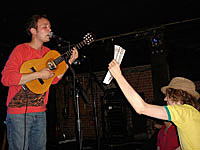 Unlike the band-enhanced show I'm expecting at Bowery Ballroom on Friday night, this show was just Jens completely solo - just he and his guitar (and microphone), plus the occasional instrument (harmonica, thumb piano) added in. Also, in one of the coolest Mercury Lounge moves I've seen yet, there was a surprise two-person horn accompaniment from musicians (members of his band?) playing from the back of the room to finish off the song Julie which in turn finished off his pre-encore one-hour set. I was pretty close to the front, so I had no idea that was coming.

Jens sounds better live than on album even, and he knows how to keep an entire room of people captivated, silent, and hanging on his every word. There was lots of crowd participation - sing-alongs, whistling, jokes, and the passing-around of 1970's photographs Jens found under a rock. The photograph-passing started while Jens played a cover song in Japanese. He asked us to please return them by the end of his set. I hope everyone did (unlike that biatch that kept Akron/Family's magic fish at Knitting Factory). 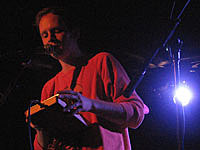 Touring partner, and now Secretly Canadian label-mate, Frida Hynovonen joined him on stage for one song all in Finnish. Jens told us he knows how to play all the instruments already, so to challenge himself he figured he'd start singing in other languages. The Finnish song was a mish-mash of expressions he already knew, like "I love you" and "Excuse me (or something like that)". Frida and Jens provided the translations before they actually sang the song. Everyone laughed which was good because Jens later told us it makes him happy that we laugh at his songs - one of his many seemingly pre-meditated stories that so perfectly led into the next song. "A man walked into a bar..."

I didn't take any pictures, so I hope thisismecl and skipscada don't mind that I grabbed the above pics off Flickr. Tonight's show in Philly is not even sold out (Get to it Philly people).