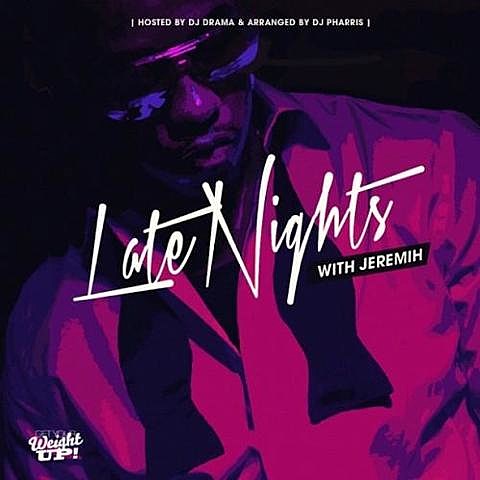 You probably know Jeremih from his insufferable 2009 R&B hit "Birthday Sex" (hear me out), but if you've been sleeping on his free mixtape, Late Nights with Jeremih (download it HERE), which he dropped this past August, you should probably wake up. Eschewing the radio R&B of that early hit, Jeremih opts for a sound more along the lines of Frank Ocean, The Weeknd, and Miguel that we've really been loving these past couple years. The mixtape is 18 tracks long and it's not without some throways and filler tracks, but the standouts really stand out and if Jeremih keeps up this direction, more great things are to come. The James Blake-leaning minimal R&B of "Fuck U All The Time" is not only the best song on the mixtape, but one of the best R&B songs I've heard all year. It was recently remixed by Shlohmo, but it already had a beat that you could have imagined Shlohmo coming up with. (It was produced by FKI, who worked with Diplo, Flosstradamus, and others on Iggy Azalea's TrapGold mixtape, and who are shaping up to be a solid project team.) Other highlights include knockout track, "Rated R," "Late Nights," and "773 Love," just to name a few of the stronger places to start.

If you're still skeptical because of Jeremih's past, that's totally understandable, but also don't forget that it is possible to make the move from corny mainstream to really interesting music (think Justin Timberlake). And given the time, it actually makes sense. I don't exactly fault him for making such a carbon-copy style radio friendly single in 2009. Miguel, whose new album is one of my favorites of the year, was doing similar things around then, but there weren't many opportunities for (male) R&B singers at the time to do anything but jump on the radio bandwagon. When guys like The Weeknd and Frank Ocean took to the internet to release free music the way they wanted it, and ultimately gained attention from music lovers and hit-seeking suits alike, the doors were opened for others to follow in their path. After two albums with Def Jam (the same label that Frank Ocean was on, who initially wouldn't release Nostalgia/Ultra) it makes sense that he used the free internet album method to reveal the sound he's actually capable of. Now that this is out there, hopefully he'll experience a similar fate to his peers that have taken similar routes and perfect his sound on a concise album.

Meanwhile, you can download a couple of the highlights from the Late Nights mixtape above and stream the whole thing and that Shlohmo remix below.

Jeremih - "Fuck U All The Time" (Shlohmo Remix)