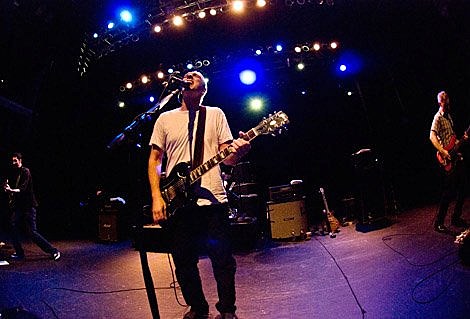 Hey everyone thank you for being part of this. I am really excited to get started recording new music and getting creative with various updates. I have a HUGE amount of music I have been working on for the past 5 years or so that needs to be realized fully. I have all kinds of things planned but am also looking forward to your ideas for different kinds of exclusives as well. So please feel free to interact and help make this something special. This is going to be awesome, fun, nerve racking and the beginning of what I believe is going to open many doors. This is totally based on your participation so if you are planning on picking up my new record anyway, I ask that you just pre-order it now and be a part of making it happen!

We are at the very beginning of this process so things like artwork, producer and potential collaborators are still to be determined. Keep checking in to watch it evolve.

It's going to be a great year.

Sunny Day Real Estate frontman Jeremy Enigk announced that he'll release his first solo album since 2009's OK Bear, and he's currently funding it with a Pledgemusic campaign. He posted the above message to the Pledgemusic campaign, and is promising a variety of exclusive rewards if you donate, which you can do here.

Maybe we'll hear some of his new material on the solo tour that he began in San Diego on Saturday (3/28). That tour hits NYC on April 10 at The Studio at Webster Hall with El May and Brian Bonz. Tickets for that show are still available. Updated dates are listed below.

Jeremy also contributed to the recently-released album by Lieutenant, the project of his SDRE bandmate Nate Mendel (also of Foo Fighters). Lieutenant are on tour now (with members of Fleet Foxes, The Bronx and Snow Patrol), having hit NYC's Mercury Lounge on Saturday (3/28) and will play NYC again at Saint Vitus tonight (3/30) with Yukon Blonde and Piers. Tickets for tonight's show are still available, and we're also giving away a pair on Facebook. Apparently there may be a special guest.

Lieutenant and Jeremy Enigk dates, both listed below...