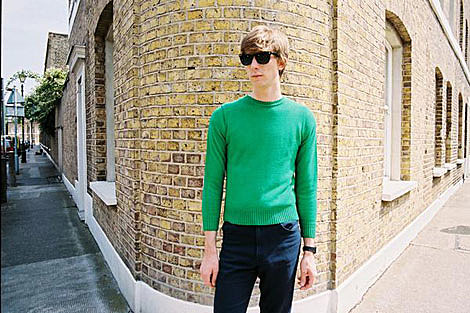 Speaking of Union Hall, the small Park Slope venue doesn't get as much attention since its bigger sister The Bell House opened in the same neighborhood, but there are a bunch of shows coming up there in the next few days that I want to highlight real quick.

LA's Jeremy Jay (K Records) is there tonight (11/5). LA's Black Umbrella is on tour with Jeremy and the pair also play Cake Shop on Friday (11/6). Michael Leviton is also on the Union Hall bill. All dates below.

Friday night (11/6) at Union Hall is a solo show by Glenn Tilbrook of Squeeze who plays Maxwell's tonight (11/5).

"Do you really want to hear the answer to the question "What if Glenn Tilbrook started singing like Freddy Mercury?" Do you think that jumping from the awkwardly stomping prog of late Led Zeppelin to ultra-compressed contemporary beats 'n' coos or McCartney-esque cute-pop is inherently interesting? If you answer yes, you might love this record. But if you're left shaking your head like me, it's probably because [Dave] Longstreth's music begs the question. Why did he make Bitte Orca? The only answer proffered is, because he could. " [Dusted]

AV Club: The guy from Squeeze.

Dave Longstreth: From Squeeze? Really? Is this guy British too? Well, whatever. I don't give a fuck.

The Union Hall show is an early show.

The late show at the same venue is your 2nd NYC chance to catch The Hidden Cameras and Gentleman Reg on their current tour. The Canadian artists played Le Poisson Rouge last night while the Yankees were winning the World Series. How was it (the show I mean)?

Glorytellers and Ida play Union Hall on Saturday (11/7). Tickets are still on sale.