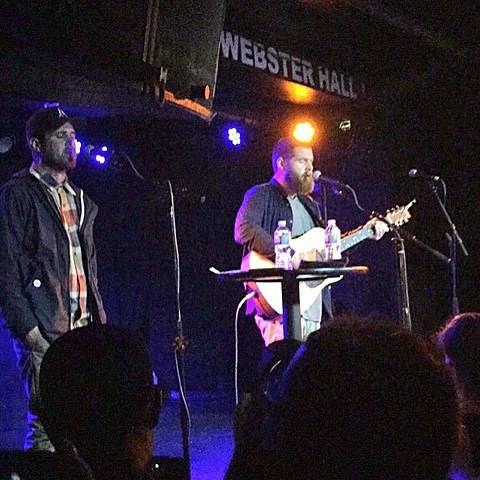 Manchester Orchestra singer Andy Hull brought his tour with Dustin Kensrue (frontman of the reunited Thrice) to The Studio at Webster Hall last night (4/28) for their first of two NYC shows. At the show, he played "Where Have You Been?," one of the highlights off Manchester's 2006 album, I'm Like A Virgin Losing A Child, and he brought out some old friends to accompany him for it: Brand New singer Jesse Lacey and Kevin Devine. Watch a fan-shot (but good quality) video below.

Andy and Dustin do it again at The Bell House on Thursday (4/30), which is sold out. Will any special guests appear at that one too?

Meanwhile, we recently got the first Brand New single in six years, followed by the live debut of another new song, and we're hoping that a new album is imminent.

Kevin Devine is up to stuff too. He's in the midst of his split singles series, and will release the next one -- a split with Perfect Pussy singer Meredith Graves -- on May 26 via Bad Timing Records.

Watch the "Where Have You Been?" video below...