Jessica Pratt at Pickathon 2013 (via) 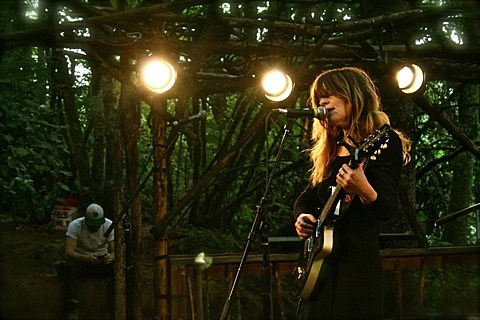 California folk singer Jessica Pratt's 2012 self-titled debut was an excellent album with the look and feel of '60s loner folk, and it looks like she's finally ready to release its followup. No title or release date has been announced for one at the moment, but we did just get a new song called "Game That I Play," which is sounding as bare bones as anything on her debut record. You can stream it below.

Jessica will be coming over to NYC soon to play a free show at the Brooklyn Night Bazaar on February 21. It's all around great lineup that also includes local dream pop band Widowspeak headlining and local indie rockers Porches opening. Like all Brooklyn Night Bazaar shows, it's free and the venue is also open for food, shopping, and more. This show is Jessica Pratt's only announced US date at the moment.

Jessica Pratt - "Game That I Play"