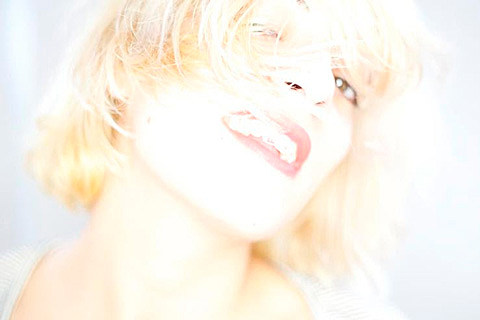 Having made music with her sister Cristi Jo as Zambri since 2008, Jessica Zambri is currently focusing on her solo project, Solvey, and will release her debut album on August 21 via Killer Wail Records. Working with Hooray for Earth's Noel Heroux as producer, she's made a terrific pop album that clearly is rooted in the mid-'00s Brooklyn indie explosion but sounds very now. It is also born from a very personal place:

The last couple years were more gray than others for me - my longtime relationship was being severely tested, 3 separate family members were enduring different battles with cancer, and at the very same time I was somehow coming into my own in a very subtle way, so subtle I was taken aback when suddenly all of these songs came rushing toward me. Recording was sort of like a deep exploration inside an abandoned building, and the more I would discover about myself, the more I could build up again, which is why now, playing shows is incredibly cathartic.

You can stream Solvey's album in full -- we're premiering it in this post. You can also check out the video for album standout "Redlight," starring Jessica as every member of two fairly terrible softball teams. Both of those are below.

Solvey will play a record release party at Brooklyn's Alphaville on August 29 with Vomitface and Mazed (tickets). She'll also open for Cymbals Eat Guitars at Rough Trade on November 7, with Painted Zeros on the bill as well (tickets).

Speaking of, Cymbals Eat Guitars collaborated on an acoustic version of "Redlight," turning it into a powerhouse duet, and you can stream that below as well.