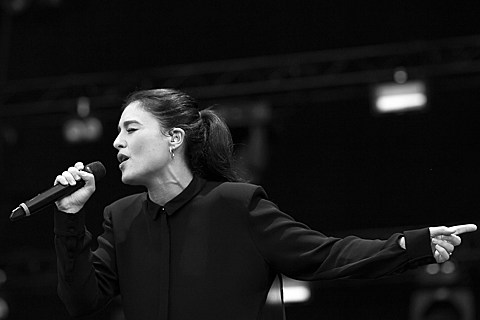 We mentioned not long ago that to get tickets to Jessie Ware's upcoming tour you had to enter via a ballot on her website. The NYC show happens on October 28 at Brooklyn Masonic Temple, and it turns out they've actually decided to release some regular tickets to the show that you can purchase. Tickets for NYC go on sale Wednesday (8/27) at 10 AM.

The shows are in support of Jessie's upcoming album, which we recently posted a new remix from. The album can now be pre-ordered on iTunes.

It's a massive compliment to be compared to her. I don't think I'm anything like Kate Bush. I mean, I just... I'm not there yet. She inspires me. I love the femininity in her voice and the way she uses it but I don't really see how I'm like her. But there's definitely been influence from Kate in some of the more high-registered stuff for this album ['Tough Love']. I definitely think on this album I've been like, "Let's make it a bit more Kate".

I just think the way she puts across a song with such emotion and feeling, there's nobody quite like her.

Jessie also mentions in the interview that she has a ticket to Kate's first live dates in 35 years, which begin this Tuesday, August 26 (all at London's Hammersmith Apollo). Don't take any pictures, Jessie!

In other Kate Bush news, BBC recently aired an hour-long documentary where they talk to St. Vincent, Bat for Lashes, Elton John, Bret Anderson (Suede), comedian Steve Coogan and more. It's really good and can be watched below...