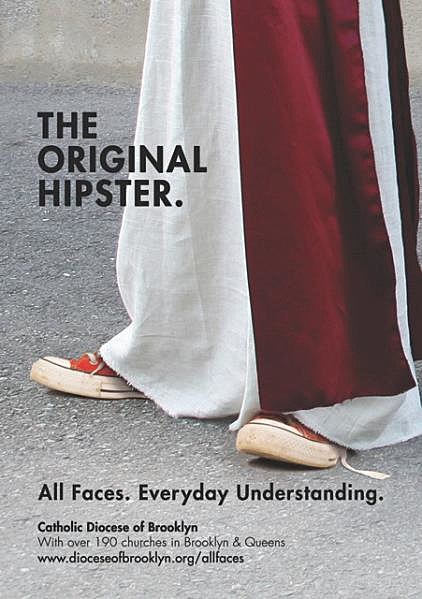 In addition to making artisanal pickles, rocking out to vinyl records and riding their precious fixie bikes, hipsters could make going to Catholic mass their new signature hobby. At least, the Roman Catholic Diocese of Brooklyn hopes so.

Since the beginning of April, the organization has put up ads reading “The Original Hipster,” depicting a robed man wearing red Converse sneakers, throughout the New York City boroughs of Queens and Brooklyn -- including the dive bars and coffee shops of Williamsburg, widely considered the Holy Land of East Coast hipsterdom. The blog Animal New York first noticed the campaign plastered on bus stations and phone booths and tweeted a photo. Then The Huffington Post, CBS New York, and CNN picked it up, and the image started going viral. (As Salon joked, the next thing we’ll see is a Cardinal Timothy Dolan cameo on Girls.

But note that the ad doesn’t actually mention Jesus anywhere. “Everyone just assumes that we were talking about Jesus and that shows religious conversation is a part of our everyday discussions for all people, no matter who you are, no matter where you're coming from,” Monsignor Kieran E. Harrington, the Diocese’s Vicar for Communications, tells TIME.

Have you seen one of these posters around? Read more at TIME.