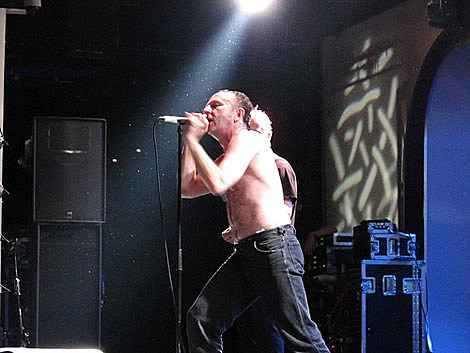 The Jesus Lizard: How a man nearing 50 can possess more energy than entire bands made up of younger souls is beyond us, but David Yow was never less than possessed during the legendary grungers' brace of Centre Stage sets on Saturday [5/9] and Sunday... 'Puss', 'Gladiator' and more were rocked out to for the first time since their break up in 1999. [Clash Music]

The Jesus Lizard, who reformed to play two ATP UK shows on May 9th and 10th, will keep the reunion going with shows scheduled through the fall. Those dates include Primavera Sound on May 28th, Pitchfork Festival on July 17th, Seattle's Capitol Hill Block Party on July 24th, ATP NY on September 11th and more (though still no NYC). They're also one of the first bands to confirm for the Fun Fun Fun Fest in Austin on November 7th and 8th.

Singer David Yow's other band, Qui, played ATP UK too. For that appearance, the band released a limited-edition 7-inch, The Little Golden Blanket, on Infrasonic Sound. The 7-inch's two tracks, posted above, are from a forthcoming Qui LP, due in late 2009. Check 'em out.

Videos of The Jesus Lizard at ATP UK (with examples of David Yow's prodigious stagediving skills) and all tour dates, below...

The Jesus Lizard Live @ ATP The Fans Strike Back: Puss