THE JESUS LIZARD REFORM,
ANNOUNCE APPEARANCE AT ATP: THE FANS STRIKE BACK FESTIVAL, MAY 2009!!

All Tomorrow's Parties are extremely excited to announce that THE JESUS LIZARD have reformed and will perform at the Fans Strike Back festival in 2009.

In what has to rank as one of the most unlikely developments in rock, the awe-inspiring primal force of the Jesus Lizard will return, briefly, in 2009. The original lineup of David Yow, Duane Denison, David Wm. Sims and Mac McNeilly will reform for a very limited series of live dates in 2009, starting with the All Tomorrow's Parties event dubbed The Fans Strike Back in Minehead, UK on May 9 and 10 and ending with a final appearance in Chicago in late November. These shows will be the Jesus Lizard's first since disbanding in 1999 and the first in twelve years to feature the original storied quartet. As anyone who has experienced the Jesus Lizard live can attest, they are one of the most intense and visceral musical assemblies to ever stalk a stage. This fleeting reunion offers an incredible opportunity to either be blown away all over again or to immerse yourself in the sweaty power and driving mayhem for the very first time.

In celebration of this event, Touch and Go Records will reissue four full-length releases from the Jesus Lizard in May 2009. Remastered recordings of Head, Goat, Liar, and Down will be available on both LP and CD, all with expanded packaging and liner notes. Bob Weston is heading up the remastering process with Steve Albini, the original session engineer, sitting in.

This is the same UK festival/weekend that Sleep are reforming to play. This is not to be confused with ATP NY which also just announced bands for 2009 (when I got this news I did get confused for a second and thought JESUS LIZARD??!, but then realized they meant for the UK) (we can still hope) (they are playing Chicago in November....ATP NY is in September...).

Jesus Lizard are playing "ATP UK Weekend 1". "ATP UK Weekend 2" is the one the Breeders are curating, and that's the one Shellac and Gang of Four (maybe not the original lineup?) were just added to. More UK ATP details below... 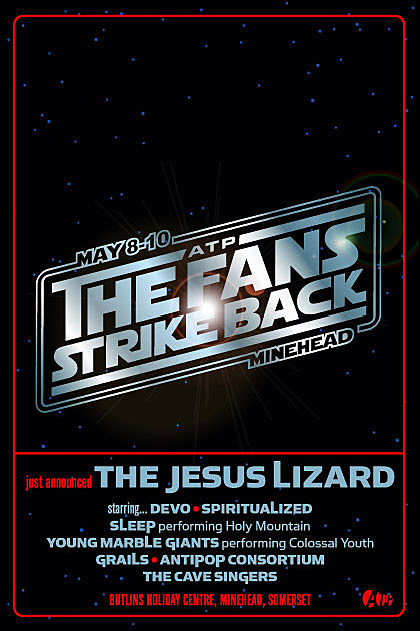 Taking place from the 8th - 10th May at Butlins Holiday Resort, Minehead, England, Fans Strike Back will see half of the festival line-up chosen by ATP and the other half voted for by everyone that buys a ticket. Voting has now started! Also added to the line-up today are The Cave Singers.
Due to some people not receiving their voting forms until late last week, the first round of voting will be tallied up and announced next Monday, 1st December, and we will then be inviting the top two bands on the list to perform.

THE BREEDERS CURATE ALL TOMORROW'S PARTIES MAY 2009!
LINEUP EXPANDS TO INCLUDE GANG OF FOUR, SHELLAC!
All Tomorrow's Parties takes great pleasure in announcing that The Breeders have been chosen as curators for ATP Weekend 2 taking place in May 2009. Created by Pixies bassist Kim Deal in 1988, the band have released four stunning and influential albums including 1993's highly successful Last Splash which spawned the epoch-making single 'Cannonball' and most recently the acclaimed Mountain Battles. The Breeders will perform at ATP and will pick a bill of 40+ artists to join them. The event will take place from the 15th-17th May 2009 at Butlins Holiday Resort in Minehead, England.
The line up today expands to include legendary post-punk band GANG OF FOUR and the always incredible Steve Albini-led SHELLAC will celebrate their 78th appearance at ATP by performing as our 'house band'. Confirmed so far: