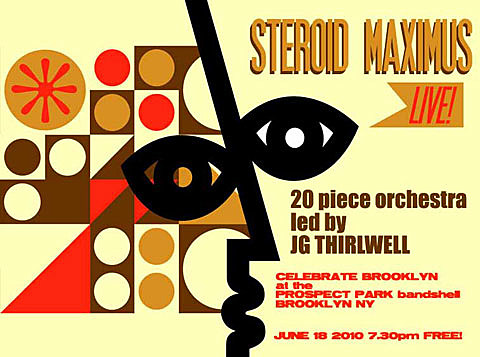 JG Thirlwell will be performing his Steroid Maximus project as a twenty piece band with brass section and strings at Prospect Park for the Celebrate Brooklyn Festival tonight, Friday June 18. Free!

Steroid Maximus will be performing the Ectopia album and selections from the score of The Venture Bros. JG will be joined by long-time colleague Steven Bernstein as musical director and on trumpet. Dr Lonnie Smith Trio will support. More info below...

BRIC Arts | Media | Bklyn is pleased to announce that the prolific Australian composer, producer, performer, artist and longtime Brooklyn resident JG Thirlwell will perform with his rarely heard big band Steroid Maximus at Celebrate Brooklyn! (9th St. & Prospect Park West), Friday, June 18. The evening will begin with a set by Dr. Lonnie Smith, the turban-wearing Hammond B-3 wizard, at 7:30 P.M. The show is free (with a suggested $3 contribution at the gate).

This concert marks the New York debut of Steroid Maximus as a big band/exotica mini-orchestra. Trumpeter Steven Bernstein worked with Thirlwell on the 2002 UCLA-commissioned rescoring of Steroid Maximus' album Ectopia, which the duo went on to perform with various players throughout Europe. Bernstein, who also leads Sex Mob and MTO, joins Thirlwell again for this performance, which is the largest and most spectacular incarnation of the ensemble and features an expanded brass section. The show will also include some arrangements of music

Thirlwell has composed for the hit Adult Swim cartoon, The Venture Brothers, which he has been scoring for the last five years. An elusive but profoundly influential presence in New York City's underground music world, Thirlwell works under many pseudonyms, including Foetus, Manorexia, Baby Zizanie, Clint Ruin and Wiseblood. Thirlwell's compositions range from orchestrations, big band, cathartic noise-rock to abstract electronics and sound sculpture, chamber music, serial music and imaginary soundtracks--sometimes all in the same album. The common thread of his music is a dramatic intensity and an evocative, cinematic quality. He has collaborated with the likes of Nick Cave, Lydia Lunch and Electronicat ; created remixes for NIN, Current 93 and Extra Life; and been commissioned by Kronos Quartet and Bang on a Can.

Dr. Lonnie Smith has been a trailblazer in developing the sound of jazz organ for the past five decades. Smith will play the opening set with his trio: Jamire Williams and Jonathan Kreisberg. JazzTimes Magazine has called him "a riddle wrapped in an enigma wrapped in a turban!" With a worldwide fan-base and recordings on over seventy albums, Smith's name is synonymous with the instrument. Born in Buffalo, New York, Smith was exposed to gospel, blues and jazz by his mother at an early age. In his teens, he went on to sing in several vocal groups including his own The Supremes. Lonnie taught himself to play the organ using Jimmy Smith and Bill Doggett records and by paying rapt attention to the church organ. Smith is known for his inspired interpretation of eclectic sampling of different genres of music. From 2003 to 2005, the Jazz Journalist Association selected him as "Organ Keyboardist of the Year" each year.