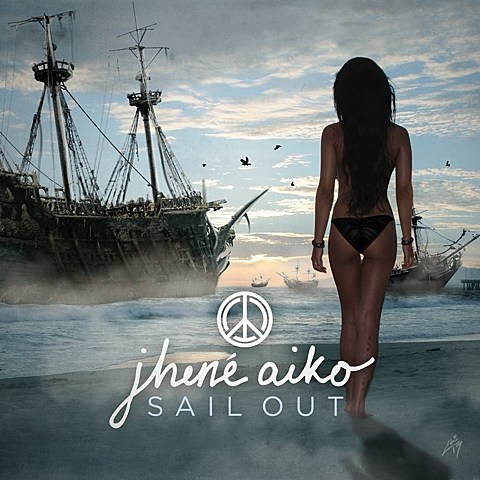 LA R&B singer Jhene Aiko is planning to release her debut LP, Souled Out, next year, but ahead of that she's got an EP, titled Sail Out, which comes out this Tuesday (11/12). The EP features contributions from two of her old Black Hippy pals, Kendrick Lamar on the sprawling, downtempo "Stay Ready (What A Life") and Ab-Soul on the brooding "Wth." Odd Future/Black Hippy collaborator Vince Staples shows up on weed/love song "The Vapors," and Childish Gambino is on "Bed Peace." Early standout single "3:16 AM" is on here too, meshing well with the newer ones for seven tracks of blissful psychedelic R&B. Check out the brand new video for its track "The Worst," over at Noisey, and videos for "3:16 AM" and "Bed Peace," plus streams of the other five tracks, below.

The same day the EP comes out, Jhene appears on Saint Heron, the new compilation from Solange's Saint Records label. In addition to tracks from Jhene and Solange, it features other forward-thinking R&B artists like Cassie, Sampha, Kelela, Petite Noir, Jade De La Fleur, Starchild, BC Kingdom, India Shawn and Iman Omari. Kelela, BC Kingdom, and the just-released Cassie contributions can be streamed below.

Jhene was just in NYC joining Drake when his tour hit Barclays Center (10/28). A video of their collaboration at the Brooklyn arena is below. She appeared on Drake's new album, in addition to recent albums by Big Sean, J. Cole, Ab-Soul and Schoolboy Q.

Videos and streams below...