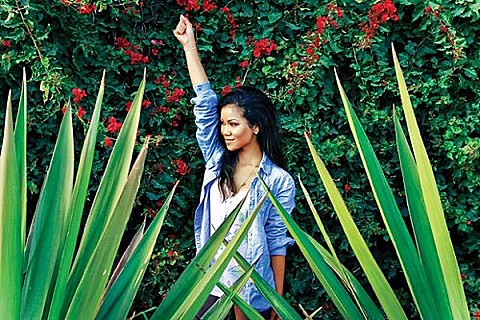 LA singer Jhené Aiko has appeared on a number of Black Hippy releases (both Schoolboy Q albums, both Ab-Soul albums, and Kendrick Lamar's O(verly) D(edicated)) and has her own mixtape out, Sailing Souls, which features collaborations with Kendrick Lamar, Kanye West, Miguel, Drake, and others. Similarly to The Weeknd, Solange, or even Autre Ne Veut, Jhené Aiko pulls equally from smooth late-night R&B and downtempo indie pop. And though that description is pretty "in" right now and causing lots of bandwagon jumpers, like the aforementioned artists, Jhené brings something new to the discussion. Her official debut full length album, Souled Out, is due out at some point this year via Def Jam.

Towards the end of 2012, Jhené dropped the Souled Out single, "3:16 AM," which stirred up a lot of anticipation for the album. And now she's back with a new single, the contrasting "Burning Man (3:16 PM)," which is just as strong as its predecessor and keeps hope high for the new record. The track was produced by Fisticuffs (Miguel, Dawn Richard) and you can watch its video, along with the "3:16 AM" video, below.

Jhené did some touring last year, including a stop in Chicago where she played a FADER/Captain Morgan show. A high quality video of her performing at that show with a killer live band is below. No future live dates to report at the moment.