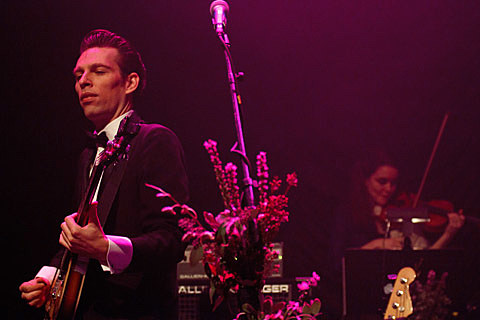 Amanda Palmer/Parenthetical Girls collaborator Jherek Bischoff released a guest-filled solo album, Composed, back in 2012, and one of its tracks, "Eyes," which features David Byrne was recently given video treatment. You can check out the new clip for the song below.

As previously discussed, Jherek will be taking part in this summer's Lincoln Center Out of Doors season, during which he and Dan Deacon will join the Kronos Quartet on July 28 for a performance at Damrosch Park Bandshell. Jherek and Dan will both be making world premieres of new pieces, and Kronos Quartet will also be performing works by Amon Tobin, Bryce Dessner, and more. Also at that show, the Asphalt Orchestra will make the world premiere of their performance of The Pixies' Surfer Rosa. That show is totally free and begins at 6:30 PM.

A few days later, he'll play his own NYC show at Le Poisson Rouge on July 31 with Jen Goma (of People Get Ready) and Contemporaneous Ensemble. Tickets for that show are on sale now.