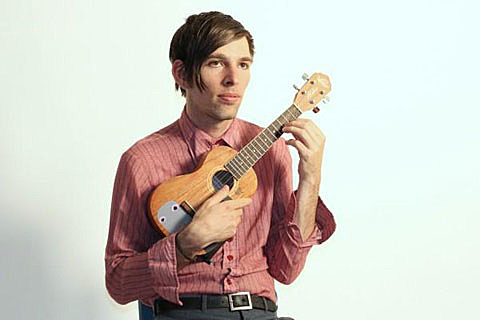 As mentioned, the Ecstatic Music Festival kicks off on February 4 at Merkin Concert Hall with Jherek Bischoff, who plays with Parenthetical Girls and The Dead Science. He's teaming up with Wordless Music Orchestra and an incredible list of guest vocalists from his upcoming album, which comes out this February, including David Byrne, Craig Wedren (Shudder To Think), Greg Saunier (Deerhoof), Mirah, and Zac Pennington (Parenthetical Girls. Tickets are still on sale now.

Speaking of Parenthetical Girls, their tour began last night (12/1) at Glasslands with Gauntlet Hair, Dinowalrus, and Eraas. If you missed it, they'll also be in NYC this Friday (12/3) at Santos Party House with YACHT and Midnight Magic (tickets).

As previously mentioned, Brassland Records is celebrating its 10th anniversary as a label and debuted a new/old track every day of November via various methods including Soundcloud. None of those tracks can be heard in the player that's embedded below. Those include "Spinney" by This is the Kit (who are opening for the National at Beacon Theater on 12/17) and "Secret of the Machines (instrumental)" by Jherek Bischoff. The latter also features drums by Greg Saunier (Deerhoof), and will have vocals by Caetano Veloso in its album version.