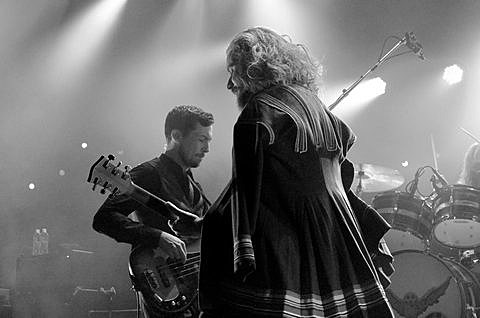 My Morning Jacket frontman JIm James, who was just announced for Bonnaroo, is currently on his previously discussed tour in support of his new solo album, Regions of Light and Sound of God, which hits NYC for multiple shows. Those shows include tonight's (2/19) sold out MHOW show with Dean Wareham, and Wednesday's super intimate sold out show at McKittrick Hotel (2/20). However, if you'd like to get into tomorrow's McKittrick show, you've still got a chance because we are giving away a pair of tickets, courtesy of show sponsor RDIO. The tickets only grant access to Jim's set, not the "Sleep No More" show, which happens right afterwards.

Jim's dates also include other NYC shows on Thursday (2/21) for the Tibet House benefit, and a sold out show at Webster Hall (4/29) with Cold Specks. All other dates are listed HERE.

======================
For a chance at winning tickets to see Jim James at McKittrick Hotel: either tweet something that includes both @BrooklynVegan AND "JIM JAMES" in the tweet, or send an email to BVCONTESTS@HOTMAIL.COM with the subject line "JIM JAMES". Include your first and last name in the email. We'll pick a winner at random and contact them with more details. If you enter by email, it will not be shared with anyone else. Good luck!
======================