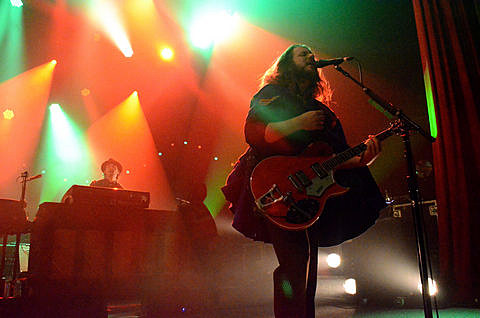 As mentioned, My Morning Jacket frontman Jim James is releasing his debut solo LP, Regions of Light and Sound of God, on February 5 via ATO, and you can now hear the whole thing over at NPR.

Jim has a few previously discussed shows coming up, including a set at the Tibet House 23rd Annual Benefit Concert at Carnegie Hall (2/21) (tickets) and two other small NYC shows, MHOW (2/19) and the even tinier McKittrick Hotel (2/20), both of which are sold out. But if you weren't able to get tickets, you've got another chance. Jim just announced a full tour which will happen this April and May and it brings him back to NYC for a show at the larger Webster Hall on April 29. Tickets for that show go on sale Friday (2/1) at noon with an AmEx presale starting Thursday (1/31) at noon.

Jim will also perform on Late Night with Jimmy Fallon on February 4 with The Roots and he will return to the show the next day to sit in for the entire episode as a guest performer.

A list of all dates and streams of two tracks off his new album, below...