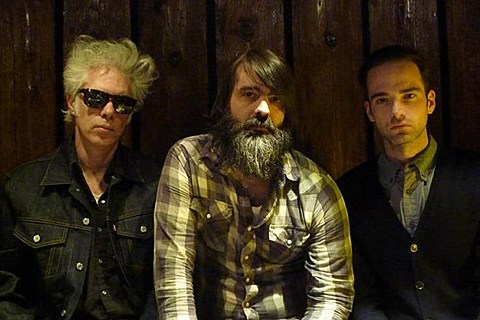 Jim Jarmusch mayb be best known as a filmmaker, but it's no secret that he's also a talented musician. He's got his duo with Jozef Van Wissem, and also his trio SQURL with Carter Logan (who Jim's been working on a Stooges documentary with) and Shane Stoneback (who produced Fucked Up's David Comes to Life and engineered/mixed the first two Vampire Weekend albums). SQURL did much of the music on Jim's own film, 2013's Only Lovers Left Alive, and late last year they put out EP #3.

It's four tracks of psychedelic rock and drone, and the final song actually comes kinda close to a folk song. About a month afterwards, SQURL released a cover of "Ocean" by The Velvet Underground, whose experimental art and sense of New York Cool is a clear influence on Jim Jarmusch. Listen to that cover below, and EP #3 at The Wall Street Journal.

SQURL will be taking be taking part in this year's Silent Films/Live Music series, which returns to downtown Manhattan's Brookfield Place from February 17-20. They've curated and will perform scores to four Man Ray films, and the series also features the US premiere of Blancanieves with a score performed by an ensemble featuring Neutral Milk Hotel's Julian Koster. Here's what the schedule looks like:

All performances are totally FREE to the public. Watch the trailer for Blancanieves below.