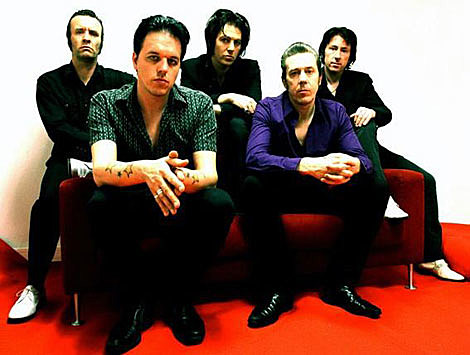 Speaking of the BrooklynVegan/AnSO Thursday day party at Austin's Spider House (full schedule here), London's Jim Jones Revue will be taking to one of the stages (right before Cheeseburger). The garage rock powerhouse, whose first record came out in 2008 and who are currently working on a new album with producer Jim Sclavunos from The Bad Seeds/Grinderman, will be making their US debut at the festival.

Since forming The Revue in 2007, Jim Jones - the jet-fuelled ex-Thee Hypnotics vocal powerhouse - has led his band through a hurricane of live shows and the recording of their first, bone-shattering LP. [Their February 4th set at London's Jazz Cafe] was predominantly made up of material from that album: a relentless meld of flame-grilled rock'n'soul and punk-R&B. In fact it's rumoured that the Jazz Café had to hold back on the band's usual volume for fear of broken eardrums and complaints from the entire postcode.

What makes the Jim Jones Revue such an exciting live prospect is their heady mix of quality songs and unpredictability. Their mining of the pre-1960 rock'n'roll sound serves them well. You feel that you've lived with these songs for a long time, yet, in a live setting, their material doesn't feel constrained by category. It just makes you stand up and listen before knocking you off your feet. [Mojo]

On the same stage will be Kid Congo Powers (aka Brian Tristan of The Gun Club, The Cramps and Nick Cave and the Bad Seeds)...

WOW. The Kid did it again. All the uber cool chops and camped up suss we've come to know and love from this true legend. Yep that's right Legend, an over used word in describing musicians for sure but hell when you've spent your life playing with three of the greatest front men of all time - Lux Interior, Jeffery Pierce and Nick Cave - you must have done something right. No one can tell me its not a justified description for someone who was in not only one LEGENDARY band but three - The Cramps, The Gun Club and Nick Caves Bad Seed's.

These days Kid Congo is hipper than ever with his own band The Pink Monkey Birds, who's charming, sexy mix of 50's Rockabilly, 60's Garage Trash, 70's Vegas Lounge Muzak, 80's Post Punk all put together with an authentic Hispanic twist - serves up some serious cool medicine both on record and live. [Splash One]

The two acts also team up again for an official showcase with The Bellrays and more at Prague later that night. Both have other shows on the docket as well. Videos of both (including Jim Jones at the above-described gig) and their full Austin schedules are below...