photo: Jim Konya with Nunslaughter at the Acheron in 2011 (more by Fred Pessaro) 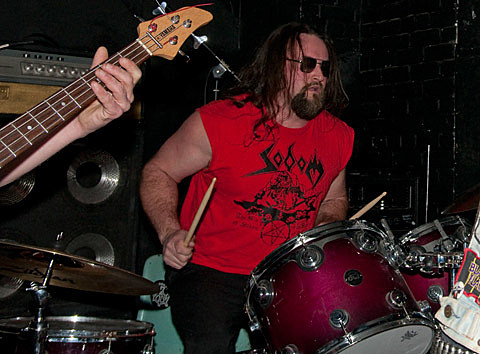 Sad news out of Cleveland today, as Jim Konya, (aka Jim Sadist, Jim Satanic, Lord Mazillion, other wonderful alter egos), drummer of numerous Cleveland metal acts like Nunslaughter and Schnauzer has passed away following a stroke suffered three weeks ago:

"A lot of people think of him as some crazy heavy-metal badass in satanic rock band T-shirts," says Bill Peters, a heavy-metal DJ at WJCU 88.7/FM who befriended Konya when he would call in to the radio station to make song requests. "But the Jim I know is the kind of person who would offer rides to strangers at the end of the night - a good person and very giving." - [cleveland.com]

The Cleveland music community had rallied together to try and raise money to help support Jim in the wake of his medical problems. The memorial page on Facebook where friends and fans are posting memories of Jim is a great testament to the impact he had on the Cleveland scene and heavy music in general.