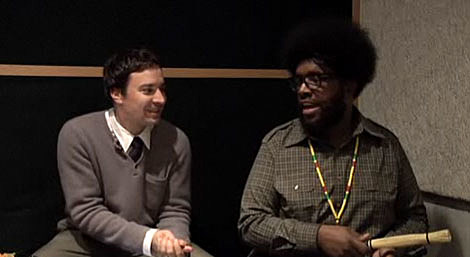 "The Roots will star as the [house] band on Late Night With Jimmy Fallon! ...Don't worry, The Legendary aren't completely hanging up their hats for the day jobby job - there's still plenty of weekends and TV-vacation time for touring. But now, in addition to their stunning live show, you'll get to watch ?uesto and co. kick it EVERY week night- what's better than that?? We've heard talks of special guests, potential skits, and other exciting surprises, but you'll just have to tune in for all that. And you know OKP will have all sorts of ex-ex-ex-cluuusives, in addition to keeping you up to date on all that's going on Fallon-wise. [Okayplayer, December 2008]

Late Night with Jimmy Fallon replaces Late Night with Conan O'Brien on NBC on March 2, 2009. Seeing as how the show is filmed here in NYC, that's where the Roots are going to have to live from now on. That means not much touring in their future. That also means lots of NYC shows....

But that's not all: Questlove also has a residency of his own, entitled 'the fANtastic', at (Le) Poisson Rouge. That "will take place every Thursday night beginning March 26, 2009 at 11PM through May 28, 2009. Special guests to be announced weekly." Tickets are slightly more expensive than the full Roots show. You can buy them for March 26 HERE.

AND: The Roots will appear at Carnegie Hall on March 16th. The show is entitled "Ask Your Mama! Music by Laura Karpman, on a text by Langston Hughes", and The Roots are one of many on this one's lineup. Tickets for that are at CarnegieHall.com.

Wait, it's not over yet: The Roots are opening for the Dave Matthews Band at Madison Square Garden on April 14th, and then at the IZOD Center in East Rutherford, NJ one day after that.

Jimmy Fallon and the Roots star in the series of videos below...