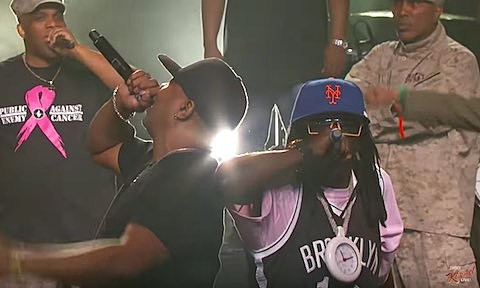 Jimmy Kimmel Live wrapped up its week in Brooklyn on Friday (10/23) with a tribute to Spike Lee's classic 1989 film Do the Right Thing. The Park Slope Two Boots they transformed into Sal's Pizza was for a short called Do the White Thing that poked fun at Brooklyn's current rep for being home to kale-eating beardos and features, among other, Billy Crudup, Zooey Deschanel, Jay Duplass, Rosie Perez (reprising her original role), and Mr. Robot's Rami Malek as an updated Radio Raheem who now has a vinyl boombox and spins Neutral Milk Hotel. Watch that below.

Public Enemy were the musical guests that night -- Kimmel introduced them from a miniature version of Di Fara Pizza that was part of the stage set -- and performed a medley including Do the Right Thing's theme song, "Fight the Power," and "911 is a Joke." Flava Flav also makes an appearance in the film parody. PE video below, too...