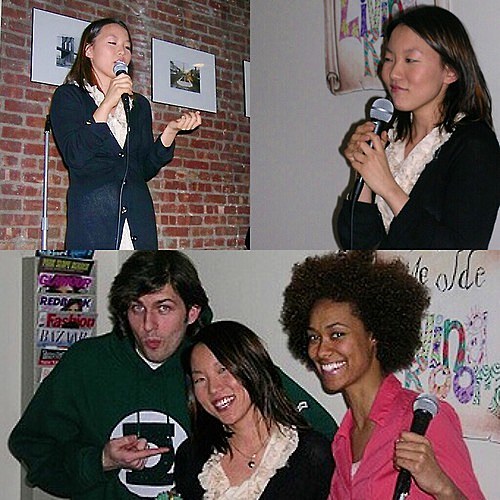 Ophira Eisenberg, Carolyn Castiglia, Nichelle Stephens, Erin and Her Cello, Jessica Delfino, Jacquetta Szathmari, Kambri Crews, Abbi Crutchfield, Livia Scott, and Michelle Buteau will take the stage at Littlefield near Park Slope in Brooklyn on Sunday, May 18th for the next edition of comedy & variety show 'Chicks & Giggles'. The event, which was already being billed as a 10th anniversary for the all-female show, is now also a memorial for comedian Jiwon Lee whose body was found in the Hudson River over the weekend. "Following the show, says co-founder Carolyn Castiglia, an informal memorial will invite anyone wishing to speak about Lee." $5 advanced tickets are on sale.

As we've pointed out before, Jiwon was loved in the NYC comedy community. The Village Voice compiled a few memories in a new article. If you have memories you'd like to share, they're also being collected via the Facebook that was set up to help find Jiwon. The message there reads:

To honor Jiwon at her upcoming memorial we are asking for everyone to share funny memories/stories they have experienced with her. She has been an amazing person and friend to so many and we are sure she has left lasting impressions on everyone she's met. Let's all bring to light the wonderful person Jiwon is and use this as an opportunity to celebrate her life. Please send to weloveyoujiwon@gmail.com. Thank you!

The GoFundMe page which was created to help fund the search for Jiwon is now a scholorship. No details are listed, but the page says "$87,723 raised by 1,202 people in 1 month" and still promises an update on a memorial service.