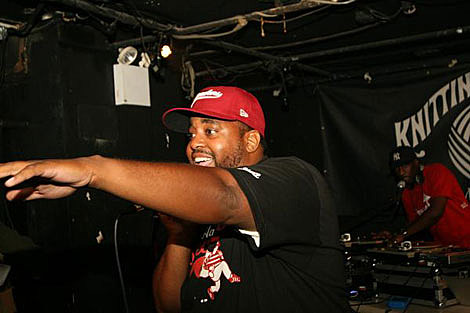 Backpack MC J-Live has a few dates lined up on his calendar, including teaming up Rabbi Darkside for a show at Mercury Lounge on March 11th. Tickets are on sale.

J-Live first appeared on the underground hip-hop scene in 1995, when he was a freshman English major at the University at Albany, The State University of New York. His first single "Longevity" appeared on Mark Farina's Mushroom Jazz CD, and follow-up singles "Braggin' Writes" and "Hush the Crowd" garnered widespread attention, getting him printed in the "Unsigned Hype" section of The Source. This led to a record contract with Raw Shack Records. His first album, The Best Part, recorded from 1995 to 1999, featured production by Prince Paul, DJ Premier, and Pete Rock... By the fall of 2001, The Best Part was finally officially released after five years of label problems.... on Triple Threat Productions, J-Live's own record label.

The "Braggin Writes" 12" was a signature song for a certain era in 90s backpack hip hop, and it's always a great moment to see J-Live do his juggles while rhyming to that song (video below). In the years since J-Live's The Best Part dropped in 2001, he has played guest MC on records by Jazzy Jeff, Wu-Tang, Handsome Boy Modeling School (Dan The Automator & Prince Paul), Slug, and many others, all while dropping multiple EPs and LPs including last year's Then What Happened?.

All dates and the video below...