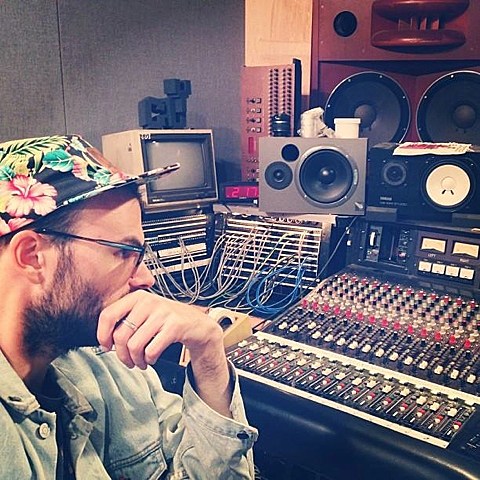 NYC/Paris electronic musician Joakim has been doing gigs in the NYC-area for a few years now, but he'd never done a "live" show with his band anywhere in the US until he opened for Holy Ghost! at Terminal 5 on Halloween. If you're wondering what a "live" Joakim show entails, he gets into that in this interview with Big Shot...

You're playing your first-ever live U.S. show in New York on Halloween. What should those who haven't seen you live yet expect?

Three people on stage: drums, bass, synths, pedals/FXs and vocals. We'll play some tracks from the previous albums and a new one. It's always a bit different from the records, because I like when a live show doesn't sound exactly like the record [and has] surprises. Don't expect a "I press play, I'm pretending I'm turning knobs but I'm actually reading my e-mails" type of live show [laughs]. It's actual live playing and there's always room for improvization in the live tracks because otherwise I would get bored on stage and I know one thing: I hate doing boring things. Males and females are welcome to dance to it.

UPDATE: Though they say this is his first "live" show in the US, it may just be his latest go at doing it "live" with a new band, as there was the "Joakim and His Ectoplasmic Band" which hit Studio B in Brooklyn among other places about 6 years ago.

You can check out some videos of the live set at Terminal 5, below.

Joakim has since announced another live show for NYC, this time a headlining set that he'll do on January 18 at Glasslands. Tickets for that show are on sale now.

Joakim also launched a vinyl-only label earlier this year called Crowdspacer. The label's most recent release is the debut single from POV (aka Joakim and Crackboy) which came out earlier today (11/4). The song's called "Adat," and you can watch a visual clip for it below. The label's first release was the debut single from Everyone (aka Joakim, Kindness, and Jam City). You can also stream that single, "No Time To Waste," below.

All Joakim dates are listed, along with all videos and streams, below...

Everyone - "No Time To Waste"