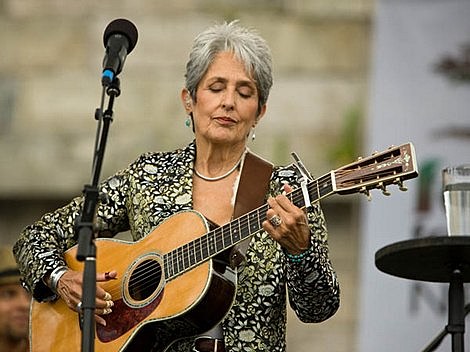 Legendary folk singer Joan Baez is about to turn 75 and she'll be celebrating that milestone with a special show in NYC at the Beacon Theatre on January 27. The show will feature a ton of special guests, including Jackson Browne, Indigo Girls, Emmylou Harris, Judy Collins, Mary Chapin Carpenter, Damien Rice, Nano Stern, David Bromberg and still more TBA. The show will also be recorded as a PBS special for the "Great Performances" series. Tickets are currently on Chase presale, go on local presale on Friday (11/20) at 9 AM and on sale to the general public on Saturday (11/21) at noon.

That show will kick off a pretty extensive North American tour for Joan, which will eventually take her back through the NYC area for two NJ shows. The first is in Englewood at the Bergen Performing Arts Center on March 6 (tickets available soon), and then she'll play in Red Bank on March 8 at the Count Basie Theatre (tickets).

All tour dates, along with a video of Joan playing live in Ecuador a few years ago, are listed below...