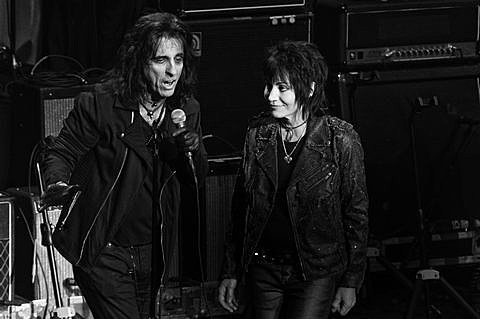 As discussed, The Who are going on a 50th anniversary tour in 2015, and since we last spoke, Joan Jett & the Blackhearts have been added as an opener, including on all five NYC-area dates. Those happen on May 20 at Nassau Coliseum, May 26 at Barclays Center, May 30 at Forest Hills Tennis Stadium, October 25 at Prudential Center and October 27 at Madison Square Garden. Tickets for all five shows are still available. Forest Hills tix here, and tix for the other four here.

Joan Jett is getting inducted into the Rock & Roll Hall of Fame with Lou Reed, Green Day and others, and she was recently honored in NYC by Green Day's Billie Joe Armstrong, Alice Cooper, Kathleen Hanna and others. Meanwhile, The Who just had to postpone two London dates this week due to Roger Daltrey's throat infection. Get well soon, Roger!

All dates (including other near-NY shows like Mohegan Sun and Atlantic City) are listed below...

* No Joan Jett & the Blackhearts

Filed Under: Joan Jett, The Who
Categories: Music News, tour dates
Comments
Leave A Comment
Back To Top
RELIVE IT: The 2019 Coney Island Mermaid Parade in pics
The Damned announce new EP, share “Manipulator”
Win the 16 album Ozzy Osbourne vinyl box set!
24 New Songs Out Today
IDLES “represent everything that is wrong with contemporary cultural politi…
Tommy DeVito of The Four Seasons, dead at 92 from COVID-19
NYC comedy clubs ask Gov. Cuomo to allow them to reopen like restaurants