Joan of Arc in Chicago in 2012 (more by Grant MacAllister) 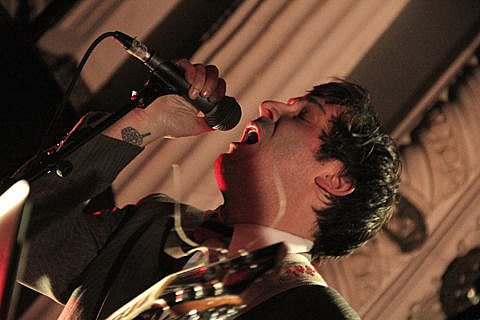 Long-running math rock eccentrics Joan of Arc are set to release their new album, Testimonium Songs, on July 30 via Polyvinyl and as a limited edition (100 pressings) cassette via Joyful Noise. Regarding the new album, the band writes:

Testimonium Songs collects the song cycle composed by Joan of Arc (Tim Kinsella, Bobby Burg, and Theo Katsaounis) to be performed live in Testimonium, a work of performance by well-respected experimental theater ensemble Every house has a door.

Testimonium responds -- both in substance and in style -- to Charles Reznikoff's monumental work Testimony, a translation into poetry of courtroom transcripts of witness and victim testimonies in criminal cases and cases of workplace negligence, in the US, spanning the years 1885 to 1915.Performances of Testimonium incorporate modern dance, theater, and original songs written and played by Joan of Arc.

In a departure for the band, these highly structured compositions, developed over a two-year rehearsal period, emulate Reznikoff's poetics by shaping themselves according to a mosaic method - rotating a fixed set of musical units in warping permutations.

The lyrics re-invent the strategies of Objectivist poetry, by turns surreal, ordinary, testimonial, and explosive, releasing the undercurrent of emotion in the poems while (almost) never quoting them directly.

The cover art, tracklist, and a stream of the opening track, "Amelia," are below.

Joan of Arc also have a tour scheduled for this August, which includes two NYC shows. First they'll play Shea Stadium on August 25 and then Mercury Lounge on August 26 with electronic musician Co La, whose new album, Moody Coup, is out now, and who will certainly help make that Mercury Lounge those shows diverse ones. Tickets for the Mercury Lounge show go on sale Friday (6/7) at noon and more info on the Shea show TBA.

All dates are listed, along with the album artwork, tracklist, and song stream, below... 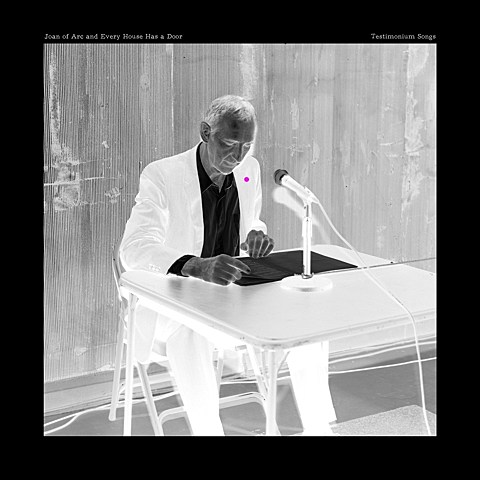 Testimonium Songs Tracklist:
1. Amelia
2. I'd Expect Babies Should Fly, If Not at Least Float Away
3. Mosaic of Bolts
4. Stephen's Song
5. The Bird's Nest Wrapped Around the Security Camera
6. Jury Duty