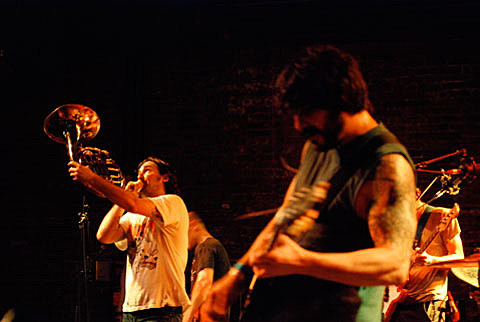 Joan of Arc play Columbia, Missouri tomorrow (11/2) as part of a string of US dates leading up to a November 6th appearance at the Mohawk in Austin for a Fun Fun Fun Fest after-party event (Tim Kinsella's other project Cap'n Jazz will play FFF proper the same weekend). A couple weeks later, Joan of Arc will blast off to the EU for a string of dates with Joan of Arc/Make Believe member Bobby Burg's other project Love of Everything.

Then after some time off, Joan of Arc will return east for for a NYC appearance at Mercury Lounge on February 1st, 2011 with Soft Circle. Tickets go on presale Wednesday, 11/3 at noon, and general sale Friday 11/5 at noon. The show looks to be part of a TBA tour with Philly and DC dates also scheduled so far (they're listed below).

Joan of Arc recently dropped a cassette box set of their recorded output to date on Joyful Noise Recordings (listing is below). The full set is sold out, but tapes (with lossless MP3s) of all the LPs are still available. Order them now while you still can.

Joan of Arc also recently released the new Meaningful Work 7" (with download codes) via Polyvinyl (cop it). And Joan of Arc's 11th LP is on the way too... that's if the band can muster up the cash for it via Kickstarter. Steve Albini will produce and although it looks like the band is well on the way towards that goal, contribute to the cause if you can and get some merch and rarities in return.

Though Devo, Crocodiles, Dum Dum Girls, and Cold Cave have all cancelled their appearances at Fun Fun Fun Fest, (they were all replaced and) you can see Cap'n Jazz, Joan of Arc, Descendents, Weird Al Yankovic, Mastodon, Scream, Floor, Cults, The Antlers, and even BrooklynVegan at Fun Fun Fun Fest and its associated after-parties this coming weekend. Tickets are still available.

All Joan of Arc tour dates and some video below...