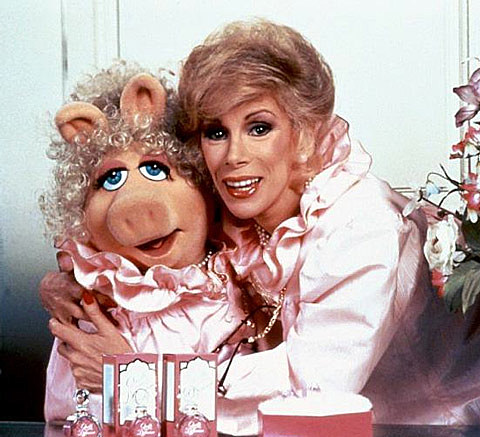 Raunchy, gravelly-voiced and self-deprecating comedian Joan Rivers, who rose from Greenwich Village standup to occasional host of "The Tonight Show" and star of TV's "Fashion Police," died Thursday after going into cardiac arrest during a medical procedure on Sept. 3. She was 81.

"She passed peacefully at 1:17pm surrounded by family and close friends," her daughter, Melissa, said in a statement. "My mother's greatest joy in life was to make people laugh. Although that is
difficult to do right now, I know her final wish would be that we return to laughing soon."

Rivers had been admitted to New York's Mt. Sinai hospital after she stopped breathing during a procedure on her vocal cords at a New York Clinic, and was placed in a medically-induced coma to assess her condition. - [Variety]

It's been a tough couple weeks for comedy, having lost Robin Williams in August. Joan, you were a real pistol and will be missed dearly. If you only know her from the red carpet, you should definitely check out 2010 documentary Joan Rivers: A Piece of Work, it's terrific. RIP, Joan Rivers.

A few classic Joan clips are below...

Mister Rogers on The Tonight Show Joan Rivers in 1983