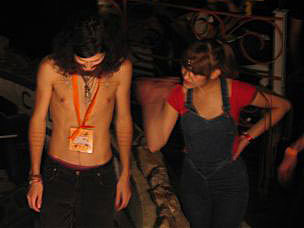 "Today at Flora we were tracking some of the soundtrack for the new brainchild of theater visionary Robert Wilson and Hal Willner. The artists are Joanna Newsom, Bill Frisell, Eyvind Kang, Doug Weiselman and Ralph Carney. Its a continuous track of an intergalactic fantasy folk orchestra."

This other site said...

And Chart Attack says that Smog's new album comes out on May 23d. About the contributors....

"Along with bass player Connie Lovatt (of Containe) and drummer Jim White (of The Dirty Three), Callahan will reportedly have a bevy of guests on hand for the album. Thor Harris will lend his percussion skills to the music, while Travis Weller will contribute fiddle and Smog’s Drag City label-mate Joanna Newsom will take a seat on the piano bench."

Above photo came from right here.