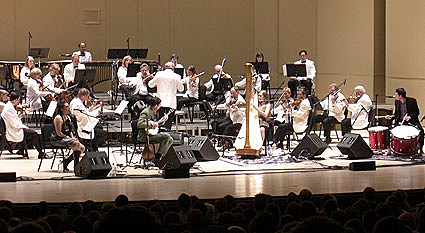 The first half of the concert featured the lush string arrangements written by celebrated pop composer Van Dyke Parks for Newsom's second album, "Ys." The second half offered older and newer songs in the rootsy, world-music-influenced settings Newsom has devised with her touring quartet. Making a puckish joke about propriety in the classical world and in pop, she wore a full-length black gown for the first part and a candy-pink minidress for the second. In both configurations, Newsom took advantage of Disney Hall's acoustics to give equal weight to every element of her multifaceted compositions. [LA Times - LA show]

All the orchestral shows in other states have been such a tease, so I couldn't be happier to finally announce that Joanna Newsom will in fact be bringing it to Brooklyn - @ BAM on February 1, 2008 to be exact. Stay tuned for more details.

Speaking of BAM, tickets are now on sale for their Spring season of shows. That includes performancs by the Mavis Staples & The National. All tour dates below...

BAM's last foray into hipness was Sufjan Steven's BQE., and not long before that they held a big show by Antony.