Joanna Newsom in Michigan in March (more by Graeme Flegenheimer) 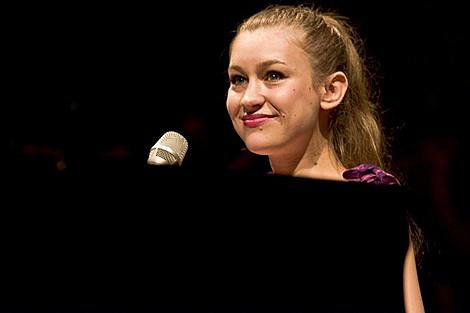 [Joanna Newsom] opened her 75-minute set with four songs from her ambitious recent full-length, "Have One on Me," before weaving in older titles from her previous two albums, "Ys," from 2006 (which featured arrangements by Van Dyke Parks), and her infectious 2004 debut, "The Milk-Eyed Mender." It was delivered via a singing voice that's as pure is it is dynamic, one that has matured from an at-times grating shriek early in her career into an instrument able to offer a smooth, well-tended tone with measured phrasings and octave-spanning curlicues. At this point feeding her pitch-perfect vocals into an Auto-Tune program would probably cause the software to collapse in on itself.

Newsom performed to a sold out Orpheum audience that rivaled Justin Bieber fans in their ardor. The singer had to spend an inordinate amount of time between songs affectionately swatting away random hollered compliments. A male fan raced to the stage and tossed her a bouquet, and a woman was intercepted by a security guard near the front row as she made a beeline for the musician. "We love you, Joanna!" was the richest insight the crowd had to offer when she queried her fans on their collective mood. [LA Times]

Joanna comes back to New York on Tuesday, November 23rd for a show at Carnegie Hall (where she plays the 2,804-seat Stern Auditorium). Tickets go on sale Monday, August 9th at 11am.

Robin Pecknold of Fleet Foxes has been opening for Joanna, and in Oakland on August 2nd they covered the Sheryl Crow (and Kid Rock) song "Picture" together. A video of that and Joanna's full schedule (a few more North American shows, then Europe and Israel in September) is below...