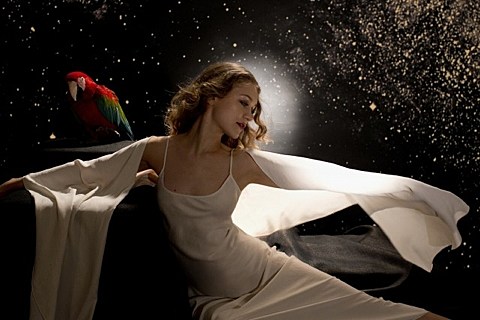 Joanna Newsom finally releases her fourth album and first in five years, Divers, this Friday via Drag City (pre-order), and for the next 48 hours it'll be streaming online (and obviously don't expect it on Spotify after that). Joanna's been the kind of artist who consistently blows away her last album with each new release. Her 2004 debut The Milk-Eyed Mender was an instant classic of the mid-2000s freak folk movement, and to follow it up she put out the five-song Ys where each song was its own mini-epic with grand orchestral arrangements from Brian Wilson collaborator Van Dyke Parks. Then she went even more massive with 2010's triple album Have One On Me, her most lush album to date.

After just a few listens, Divers sounds like Joanna's first new album to not instantly top its predecessor. It feels like a condensed and slightly more accessible version of the style she explored on Have One On Me, but of course that still means it's some of the best music coming out today. Joanna takes her time getting new albums out into the world, and it shows. Her voice and harp are complemented by meticulous arrangements, and the lyrics are especially striking here too. On the album's title track (and longest song), she asks the questions that philosophers and poets have been asking for centuries ("Tell me why is the pain of birth lighter borne than the pain of death?") but never sounds hollow or redundant. And even if you weren't paying attention to her words closely, you'll be sucked in by the repeated mantra of "you will not take my heart alive" on the song of the same name.

Even if this album doesn't make a huge musical jump from the last, it does find subtler ways to progress. Twangy electric guitar is more noticeable than ever before on "Goose Eggs" and "Waltz of the 101st Lightborne," the latter of which also throws in some accordion and fiddle playing for an effect not quite like any of her previous material. At times, Joanna's voice is bolder than ever too. She's gotten plenty of Kate Bush comparisons in the past, but some of the real triumphant parts here remind me of Stevie Nicks (in a "Silver Springs" or "Sisters Of The Moon" kind of way). Mostly though, it sounds like an album that only Joanna Newsom could make and it seems like the kind of thing that's meant to reveal itself over time. Head below to listen for yourself (via NPR).