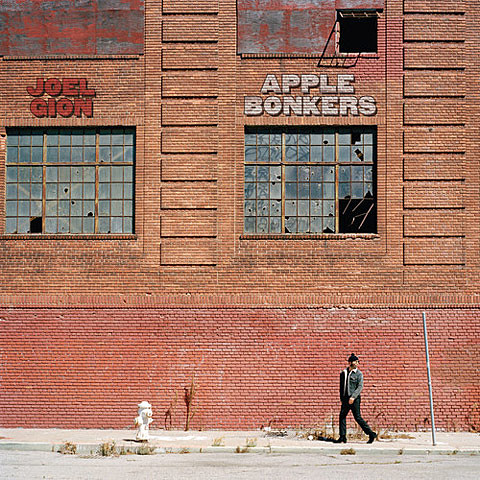 You may know Joel Gion as the mutton-chopped tambourine player in Brian Jonestown Massacre whose sense of humor and wry asides made him a scene-stealer in BMJ doc DiG!. (You may also know him from that one episode of Gilmore Girls.) Joel is still with the BJM but he's got a solo album, Apple Bonkers, out on August 19 via The Reverberation Appreciation Society.

If you're a Jonestown follower, you might recognize some of the people who play on the album: Matt Hollywood, Daniel Allaire, Miranda Lee Richards, Pete Holstrom (to name a few). Says Joel of the album:

With all the BJM members now living  so spread out across the world, I found myself increasingly missing the album making process. This feeling of disconnect is what kick started me into exploring my own song writing process and turned out to be a hugely important piece of self discovery. No more time for my beloved laziness. So I made my own music with a with bunch of friends in the studio coming and going and having a great time creating. I think a lot of people are going to be surprised by this album.

With the musicians involved, it's no surprise that sonically it's firmly in the BJM's psychedelic '60s wheelhouse, but this is pretty together stuff and Gion has more up his sleeve than a tambourine. (He's not a bad singer, either, if you were wondering.) Hear for yourself, we've got the premiere of the Apple Bonkers' "Dart" which you can listen to, along with another track from the album, in this post. If you pre-order the LP you get an instant download of those two tracks.

No North American tour plans at the moment, but Joel Gion (with members of the BJM) are currently in the UK and those dates listed below. (He has another band, The Primary Colours, but that's not who is on this tour.) Joel says the band plans to be on the road on our continent later this year, stay tuned.

While we're on the subject, the Brian Jonestown Massacre released their 14th album, Revelation, earlier this year and it's by far the best thing they've done in ages. Post-DiG!, it's been easy to forget that people liked the BJM for the music before the onstage bust-ups. Anton Newcombe seems to have it together these days and Revelation is full of memorable melodies and not too much of the lengthy jamming which the band's late-'00s LPs were full of. If you dug Take it from the Man and Their Satanic Majesties' Second Request, you should definitely give this one a spin. It's streaming on Rdio. No North American BJM dates either.