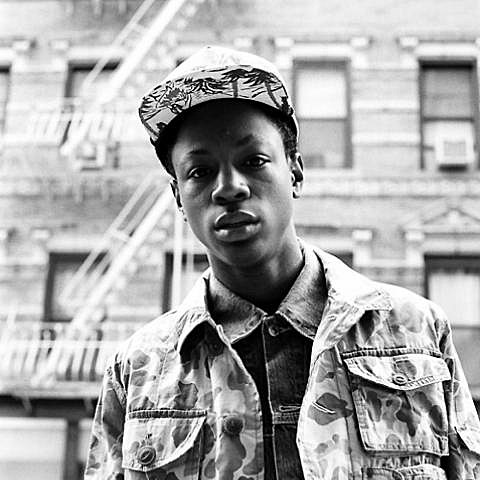 Young Brooklyn rapper Joey Bada$$ put out two of the strongest rap releases of the year so far with 1999 and Rejex, both of which are highly indebted to the golden age era sound of Illmatic, Ready to Die, Reasonable Doubt, and other classics of that kind. Joey and his crew, Pro Era, have been playing locally a lot lately (like when they joined Ab-Soul at Terminal 5 when Ab-Soul was opening for Kendrick Lamar), and they'll continue to do so with a number of shows this month.

This Wednesday (10/10), Joey will join Pusha T, Biz Markie, Action Bronson (who you have plenty of other chances to see), Sicky Brett (of Past Due), plus host Sophia Urista and guest DJs and performers at the Downtown Brooklyn College Festival, which takes place in the BAM parking lot (30 Lafayette Ave). Admission is $10 for students and participating schools include NYU, LIU, Berkeley College, and Saint Francis College. Tickets for that college festival are on sale now. Joey is also scheduled to play at this year's CMJ and at SUNY Purchase Fall Fest a week later (10/27).

Regarding CMJ, as mentioned, Joey and Pro Era will play the Yours Tru.ly day party at Glasslands on October 19 with Ratking, Jim-E Stack, Isaac Delusion, Evy Jane, Night Panther, and MØ. That show is free with RSVP. Then, later that night (10/19), Joey will head to Brooklyn warehouse Villain for the official Pitchfork showcase with Death Grips, LE1F, DIIV, Holy Other, METZ, Merchandise, Daughn Gibson, Hundred Waters, and Angel Haze. That show is free to the public but 200 priority tickets will be given away at the Topman store (478 Broadway in SoHo) "on Wednesday and Thursday between 10 AM and 9 PM."

Keeping his Friday of CMJ busy, in addition to those two shows, Joey will also perform at the Self Taught Showcase at The Studio at Webster Hall (set time TBD).

Before those three parties, Joey and Pro Era will play the Cinematic Music Group/Ekco Ultd/XXL showcase at SOB's on October 18 with Big K.R.I.T., Smoke DZA, Fat Trel, Cashius Green, Chance the Rapper, and Mookie Jone, with hosts Peter Rosenberg and Shiest Bubz. Tickets don't seem to be on sale at the moment but Ecko is running a ticket contest. The show flier is below. Both Joey Bada$$ and Big K.R.I.T. are featured on Smoke DZA's new free mixtape, K.O.N.Y..

In related news, Joey Bada$$ is releasing a new single this fall via Green Label Sound, for which he'll be working with "someone [he] considers an icon." Stay tuned for more info on that. Meanwhile, stream some tracks from 1999 and check out a list of all dates below. 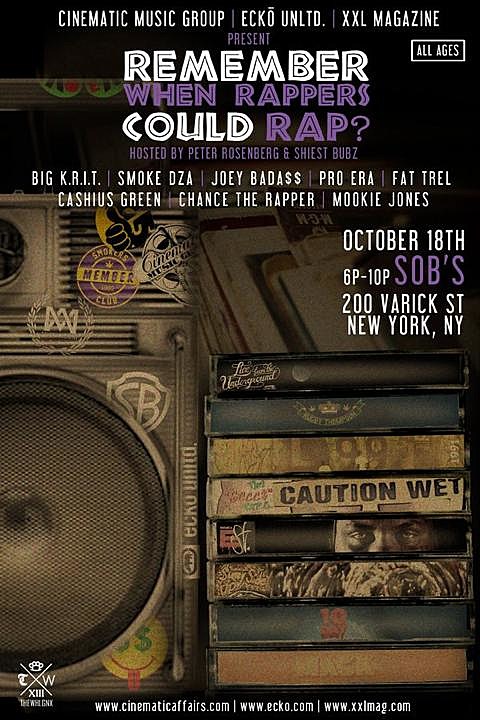