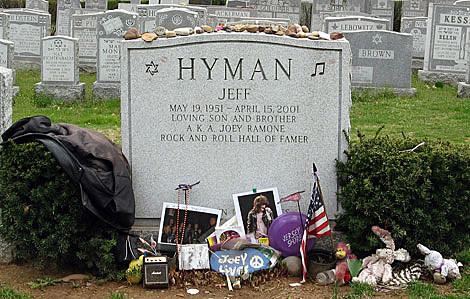 "Joey Ramone (May 19, 1951 - April 15, 2001), born as Jeffrey Ross Hyman, was a vocalist and songwriter best known for his work in the punk rock group the Ramones. Joey Ramone's image, voice and tenure as frontman of the Ramones made him a countercultural icon." [Wikipedia]

Joey Ramone's 58th-birthday bash is tonight (May 19th) at Irving Plaza. Acts on the bill for that include Fishbone, Supersuckers, Death, Uncle Monk (with Tommy Ramone) the Friends Of Joey and more. Included among the Friends Of Joey will be Richie Ramone, Handsome Dick Manitoba, Jean Beauvoir and others. Tickets are still on sale.

The event will also be the unveiling of new tracks from the forthcoming posthumous Joey Ramone solo record. In other Joey Ramone news, the singer's induction award to the Rock & Roll Hall of Fame was re-presented to his estate at the Rock & Roll Hall of Fame Annex in NYC, and accepted by Mickey Leigh and Tommy Ramone, on Thursday, May 14th, after mistakenly being left off the program in the original 2002 ceremony.

Coming up, Tommy Ramone and Handsome Dick Manitoba, who will be at the birthday bash, are speaking with Lenny Kaye (of the Patti Smith Group and more) and Chris Stein (of Blondie) at "LOUD FAST JEWS! A Summit with Four Jewish Fathers of Punk" on Thursday, June 11th at the YIVO Institute for Jewish Research (15 West 16th St). Tickets to that event are on sale. More info below.

Catch Chris Stein this summer with Blondie, as the band tours alone and with Pat Benatar and The Donnas. All three will play the tour's NYC stop, a free show on August 13th at Coney Island's Asher Levy Park.

Also coming to NYC is Gods and Monsters' 20th anniversary show, scheduled for NYC's Gramercy Theatre on June 11th. The band, helmed by guitarist Gary Lucas, will be joined by guests that include Lenny Kaye. Tickets are still on sale. 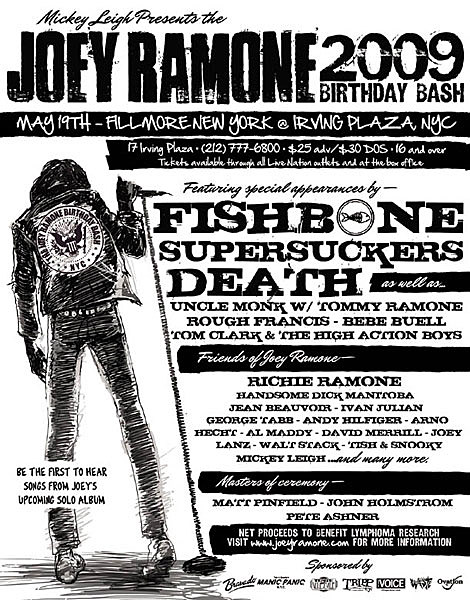 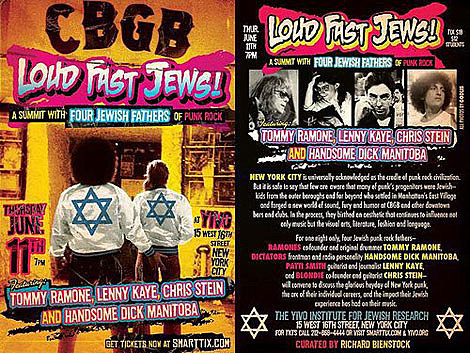 LOUD FAST JEWS!
A Summit with Four Jewish Fathers of Punk
Featuring Tommy Ramone, Lenny Kaye, Chris Stein and Handsome Dick Manitoba!
When: Thursday, June 11th - 7pm
Where: The YIVO Institute for Jewish Research (15 West 16th St, NYC)
Who: Tommy Ramone, Handsome Dick Manitoba, Lenny Kaye, and Chris Stein
What: A discussion on the glorious heyday of New York punk and the impact their Jewish experience had on their music
Cost: $18 for the general public, $12 for students

New York City is universally acknowledged and rightly revered as the cradle of punk rock civilization. But it is safe to say that few are aware that many of punk's progenitors were Jewish - kids from the outer boroughs and far beyond who settled in Manhattan's East Village and forged a new world of sound, fury and humor at CBGB's and other downtown bars and clubs.

Much like their American and European Jewish forebears, these pioneer punks both reflected and redefined the culture of their day heritage to create a dynamic new art form. In the process, they birthed an aesthetic that continues to influence not only music but the visual arts, literature, fashion and language.

In this forum, four Jewish punk rock fathers - Ramones founder and original drummer Tommy Ramone (born Tamas Erdelyi), Dictators singer and radio personality Handsome Dick Manitoba (Richard Blum), Patti Smith guitarist and journalist Lenny Kaye, and Blondie co-founder and guitarist Chris Stein - will convene at the YIVO Institute for Jewish Research (15 W. 16th St in NYC) on Thursday, June 11th, to discuss the glorious heyday of New York punk, the arc of their individual careers, and the impact their Jewish experience has had on their music.

* Curated by Guitar World Magazine editor Richard Bienstock, this event is open to the public.