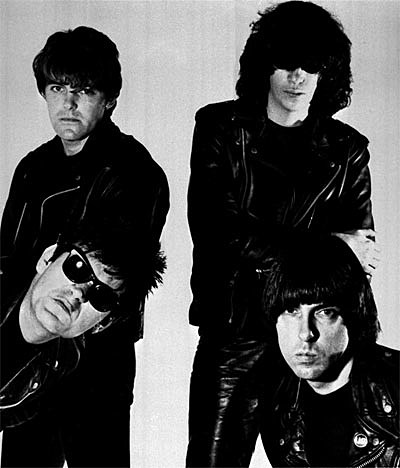 Richard Reinhardt (a.k.a Richie Beau, Richie Ramone) (born August 11, 1957) is an American drummer best known for his work with the punk rock group the Ramones.

Before working with the Ramones he drummed with Velveteen, and is also reported to have drummed with Annie Golden's band The Shirts. He joined the Ramones on February 13, 1983, at a show at Utica, New York, after second drummer Marky Ramone was fired. He took part in the Subterranean Jungle tour of 1983, where he signed autographs as "Richie Beau", which was the name he went under whilst drumming with Velveteen. [Wikipedia]

Richie recently lost a copyright infringement lawsuit against Wal-Mart, Apple, and Real Networks. Richie will NOT be appearing at the upcoming Joey Ramone birthday bash. Those who will are listed below....

Once again, the fickle finger of fate has pointed at a drummer. Unfortunately, Richie Ramone has just let us know that he is not going to be able to participate in the Joey Ramone Birthday Bash this year. We are very sorry about this turn of events, but after 8 years it's apparent that nothing dampers the spirit that makes this celebration of Joey's life and legacy one of the greatest events in NYC every May 19th. In fact, THE PARTY STARTS NOW with a special guest appearance of MANITOBA'S WILD KINGDOM featuring Handsome Dick Manitoba, Andy Shernoff, Ross The Boss, and JP Thunderbolt of THE DICTATORS; the singer of one of Joey's all time favorite girl groups MARY WEISS of the legendary SHANGRI LA'S performing her hits Leader Of The Pack and Give Him A Great Big Kiss; singer/guitarist RICHARD LLOYD of TELEVISION with his new band the SmuftyDogs, JESSE MALIN; CHEETAH CHROME; WALTER LURE; former PLASMATIC and Ramones producer/collaborator JEAN BEAUVOIR, from The UNDEAD ex- MISFIT BOBBY STEELE; AL MADDY; IVAN JULIAN; MC's LITTLE STEVEN VAN ZANDT and MATT PINFIELD; plus LES Stitches; Semi Precious Weapons; Local H; The Independents; Charm School; and Rachel Newman. All that and more. You don't want to miss this. [JoeyRamone.com] (thx J)