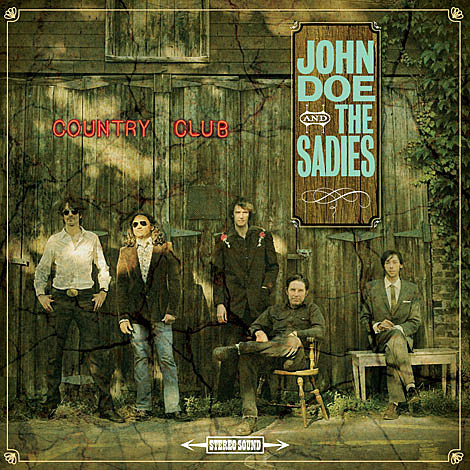 "In true honky tonk style, Country Club is the bastard child of a drunken promise. A post show hang-out between X & the Knitters' [John] Doe and The Sadies produced the idea to join forces to a make an album of country songs. Both rock n' roll and country music are littered with the ghosts of broken promises but this one was destined to become reality. Timeless sounds abound on Country Club, driven by Doe's gorgeous vocals, the dueling thousand pound chops of the guitar-wielding Good brothers and The Sadies' world class rhythm section of Mike Belitsky and Sean Dean. Here, the Countrypolitan sound of late 1960s Nashville is filtered through the telecaster-based tonk of Bakersfield, CA and the results are simply stunning." [Yep Roc]

Country Club is out now on Yep Roc Records and streaming at Reverb Nation.

John Doe and The Sadies are playing several May dates as a combo. Those include a show at NYC's City Winery on Wednesday, May 6th. Tickets are on sale now. All dates below.

John Doe also has scattered tour dates with X from now till June. As part of their Total Request Live tour, which will feature set lists picked online by fans, X is playing three nights at the Bowery Ballroom. Tickets are still on sale for all three dates: May 29, May 30, May 31, and the three day pass

The Sadies are opening dates for Jenny Lewis from May 27th to June 4th. Lewis continues on tour without the Sadies through July 9th which is exactly a month after she plays Music Hall of Williamsburg with Deer Tick (sold out).

The Sadies are also featured on Neko Case's new album Middle Cyclone. Neko is in NYC for two shows at the Nokia Theatre as I write this.

All John Doe & The Sadies tour dates below...