photo: John Fogerty at Jones Beach in 2014 (more by PSquared) 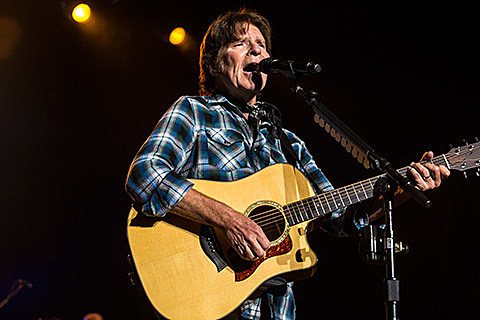 1969 was a pretty great year for John Fogerty, whose band Creedence Clearwater Revival put out not one, not two, but three now-classic albums in that same year (Bayou County, Green River and Willy and the Poor Boys). He'll be celebrating the material from those albums (as well as other favorites from throughout his career) on another leg of his "1969" tour which happens throughout the US from May-August.

The tour includes a NYC show happening on June 24 at Radio City. Tickets for that show are on sale now. All dates are listed below.

John also confirmed an October 6 release date for his upcoming autobiography, Fortunate Son: My Life, My Music, which Little Brown is putting out. "I'm just being brutally honest," he tells Billboard. "I'm not trying to shock or surprise anybody; really, I'm just being honest. It's just simply the only way I've been able to exist, anyhow. I don't know any other way, for my own mistakes and certainly mistakes of others, if you want to look at it that way. In the end, human beings, we are what we are. I'm not running for president or anything, so I'm not white-washing the life that I lived."

All dates are listed, with a video of CCR playing the song John's autobiography is named after (from one of their 1969 albums), below...