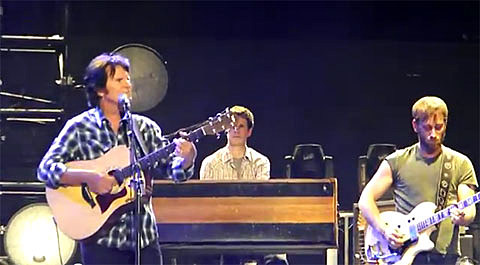 "...a special appearance from John Fogerty, making his Coachella debut (he's already co-headlined a night at Stagecoach). The Creedence Clearwater Revival legend, who played Woodstock alongside the Band back in '69, joined Dan & Pat for the day's second touching tribute to the late Levon Helm, with a warm and appreciative handling of "The Weight." Fogerty handled the final verse, Rick Danko's bit about Crazy Chester and Jack his dog; Auerbach called Helm, a crucial figure for roots-rock, "amazing and inspiring."

I had foolishly walked away to write this while listening to Explosions in the Sky at the Outdoor Theatre, which still smells like a 10-acre pot farm on fire well after that momentarily mesmerizing band left the stage. Things suddenly got quiet over here, I glanced to the right (thanks to a texted tip from faithful reader April McBride) and instantly caught the "take a load off, Annie" refrain ... then went SPRINTING back to the main.

It was SO worth the charley horse I have now. As was the Black Keys' finish, a ripping chant-along for "Lonely Boy" and another scorching finish with "I Got Mine." [OC Register]

Refused weren't the only ones paying tribute to Levon Helm at Coachella Friday (4/20). Watch the video of Fogerty covering "The Weight" with the Black Keys, below...

--
The Black Keys with John Fogerty covering The Weight

Pictures and the setlist from the guest-free set The Black Keys played at Coachella one week earlier, HERE.