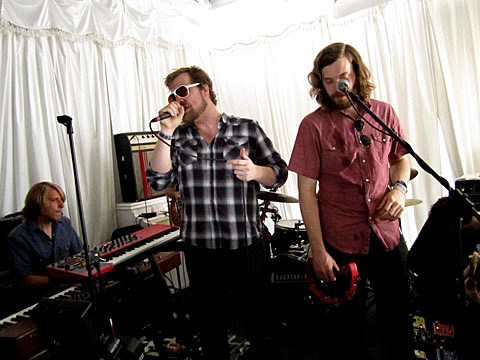 John Grant released his new, synthier album, Pale Green Ghosts, in the UK earlier this year, and as mentioned, it comes out in the US on May 14 via Partisan. The album features guest vocals from Sinead O'Connor and was produced by Biggi Veira of Iceland's Gus Gus. John will be supporting the album with a previously discussed tour that hits NYC on April 25 at Le Poisson Rouge. Tickets for that show are still available, and if you can't make it, you can watch the live stream from the comfort of your own home. His tour was recently expanded, and all upcoming tour dates are listed below.

Ahead of the album's US release, John also had Hercules and Love Affair remix one of its tracks, "Black Belt." You can stream that clubby remix below and compare it to the original track, which you can download above.

In less positive news, John recently spoke to The Guardian about his 2011 diagnosis of being HIV positive, a topic he confronts on the new album:

Only after his HIV diagnosis has Grant accepted that he hadn't conquered his addiction but simply transferred it from substances to sex. "If I can't go out and do fat rails [of cocaine] off the bathroom floor at a club, I want to at least have my sex, because sex is natural. Nobody's going to deny me that, right? But that's just cheating. I was out there fucking for a purpose, to hurt myself, to punish myself for not being good enough. And when I realised I had to deal with that too, I was just so tired. I was like, Are you kidding me? I can't relate in a normal way to anything! I mean, it's enough to make you despair."

Head to The Guardian to read more, like John discussing his collaborations with Sinead O'Connor. There's also a great feature on John in the May 2013 issue of MOJO which is on newsstands now.

Updated dates are listed, along with those song streams, below...